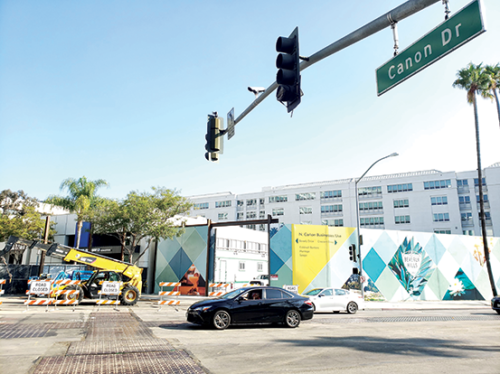 On Sept. 17, a request by the Los Angeles County Metropolitan Transportation Authority to lift the holiday moratorium on subway construction in Beverly Hills was unanimously rejected by the City Council.

The moratorium, which will last from Thanksgiving Day to New Year’s Day, will allow retail businesses and restaurants to take advantage of the busy holiday season, a time that some representatives of the business community said can make or break a business.

The retail and restaurant industries are difficult enough as it is, and subway construction during the holidays would further hurt the businesses’ prospects, said Bill Wylie, director of Two Rodeo Drive, during public comment.

“For retail and restaurant businesses, the holidays really do matter,” Wylie said.

Two other public speakers also opposed Metro’s request, though some businesses and groups, such as the Beverly Hills Chamber of Commerce, said they’d support a waiver, especially with conditions to mitigate some of the worst impacts of continuing construction. The support of the waiver, however, was not enough to sway the council.

“If I heard tonight there was a vast amount of the business community that said they wanted it, I’d support it, but that’s not what I heard,” Councilwoman Lili Bosse said.

Michael McKenna, Metro’s executive officer of project management for Section 2 of the Purple Line Extension, said the moratorium itself is only five weeks long, but construction crews must spend a week and a half before the construction break resurfacing and striping streets, then a week and a half after the break undoing the temporary street repairs, resulting in “an eight-week hit to us,” McKenna said.

The project is currently expected to be finished by July, but any delays could have negative impacts on tourism retail and hotels, which have their peak seasons in July and August, McKenna said.

“We felt we were being respectful to the hotels and the retailers when we made this request,” McKenna said.

Mayor John Mirisch and Bosse, who serve on the City Council’s Subway Ad Hoc Committee, initially bristled at the request, which they said runs counter to the negotiated agreement between the city and Metro. Mirisch said the committee rejected Metro’s proposed waiver, which has no public benefits to Beverly Hills.

“This probably shouldn’t even be agendized, because [the committee’s response] was a clear, ‘Are you kidding?’” Mirisch said.

The other council members were less critical, saying Metro was within its rights to ask for the moratorium to be lifted. However, they could not support construction work during the holiday season.

Is BH going to pay for the extra project costs that this causes? Metro should send the city the bill.

Metro should demand that Beverly Hills pays for the down time and preparation time on either end of the moratorium.

This is absolutely shameful, and the only way it could be justified is if BH foots the bill for the delay. No other community was allowed or granted this permission. If BH wants to use it’s massive eonomic and political clout to delay public goods (the subway) they have to compensate Metro. I’ll vote with my wallet; I will not be shopping or eating in BH this holiday season.