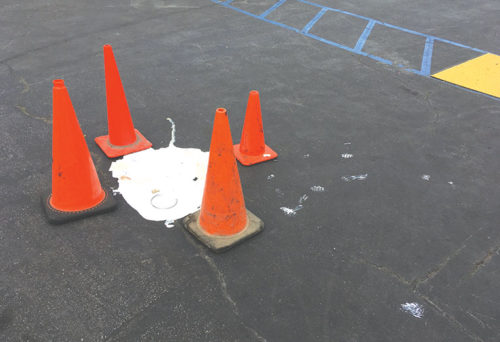 photo courtesy of the MAK Center

The 48th group of MAK Center Artists and Architects-in-Residence will exhibit their works from Sept. 5-7 at the Mackey Apartments in a show called “Michael was a good neighbor.”

During her time in Los Angeles, Park explored Koreatown, focusing on the idea of a replica of a city within another. For this series, Park has made casts of art deco motifs found around Koreatown and created sculptures using organic materials, such as beef fat and spices. The work sheds light on a nostalgia-driven area that has been built and rebuilt, all the while leaving intact a relationship between the original and contemporary Koreatown.

Behrbohm and Buehler, collectively known as Flying Holes, have embarked on an expedition to the center of the world along the infrastructure of the internet. Assisted by an artificial search dog, Behrbohm and Buehler conducted atmospheric research in proximity to large data fields, surveyed the clouds and measured emission data, exploring the Internet’s psychogeography. They pose questions regarding a society that spares no pain to achieve its electronic dreamscape, as a world that was once meant to feel connected morphs into a fragmented wasteland of servient infrastructure.

Anton focused on the U.S./Mexico border wall, or as many now refer to it, the “Trump Wall,” which is one of the largest public works programs in the last decade. Border towns such as San Diego/Tijuana, Calexico/Mexicali and El Paso/Juarez are more heavily monitored due to increased attempts to cross in these areas. “Coyotes” carefully cut holes through the fence at night using battery-powered tools for migrants to cross through. The next morning, Border Patrol arrives to patch and weld the new opening. Anton documented this “cat-and-mouse” game during his residency with the MAK Center, considering why and how the holes are patched the way that they are and studying the disparate processes Border Patrol employs.

O’Farrell meets with seniors in Hollywood