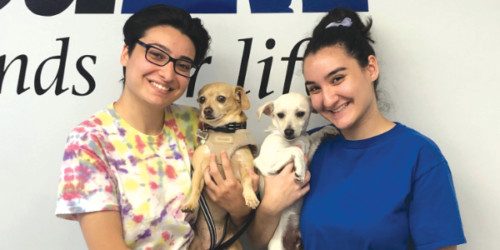 The Mid-City shelter operated by the Society for the Prevention of Cruelty to Animals Los Angeles recently reached a milestone when Biscuit, a 5-month-old Chihuahua mix, became the center’s 100th adoptee.

The center reopened on July 20 after renovations and improvements were made to the facility through the support of the Stringer Foundation, Petco Foundation and individual donors. The facility first opened as a pet shelter in 1949 and was renovated in the 1960s when an administrative building was added. After ceasing shelter operations in the early 2000s, the location on Jefferson Boulevard was used for spay/neuter services, emergency animal housing and a training center. It became an animal shelter again in July and is currently offering dog and cat adoptions.

“I couldn’t have asked for a better 100th adoption,” said Jessica Wolf, pet adoption center manager. “The response to the center from the community has been so positive – it’s a great feeling. People in the neighborhood and all over Los Angeles have come to visit and adopt.”

Biscuit was adopted by two sisters who live in Grenada Hills. Dogs, cats, puppies and kittens are available for adoption from 10 a.m. to 5 p.m. Wednesday through Sunday. The spcaLA Pet Adoption Center is located at 5026 W. Jefferson Blvd. For information, visit spcaLA.com.