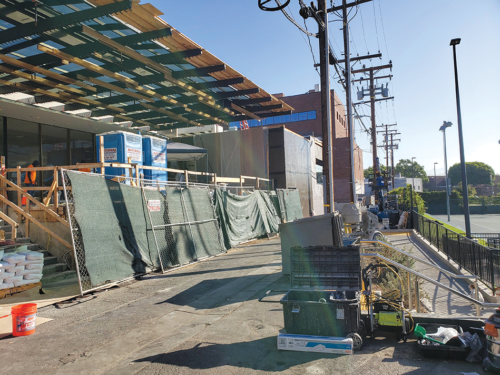 The West Hollywood City Council voted unanimously on Aug. 19 to move forward with designing potential improvements to the alley on the north edge of West Hollywood Park. The alley, which backs up to businesses like Koontz Hardware and restaurants and bars like Bottega Louie and Pump, is currently fenced off from the nearby park.

The council discussed ways of bridging the park and the nearby businesses, some of which are building or considering plans to build back patios for patrons to eat and drink. City staff suggested removing the fence and vines that block views of the park – and potentially removing the power poles and placing wires underground – so the restaurant patrons could enjoy the park view. Some suggested widening the alley or using a terrace with stairs, benches and greenery to ease the transition between the backs of the businesses and the park.

Other ideas included prohibiting car traffic in favor of pedestrians, transforming the alley between Pump restaurant and the Abbey into a pedestrian-friendly, ADA-compliant walkway, and using lights and artwork to animate the area.

Many of the suggestions were well-received by the council, who said they’d like to improve the alley beyond its current purpose of providing rear access to the businesses and storing three large trash receptacles.

Some council members offered suggestions and tweaks to staff’s proposals. For instance, while the idea that a terrace would lead down to the park level was met with some support, Councilman John Duran said he would like to see water features, a garden or some other use that would prohibit the area from becoming attractive to homeless people looking for a place to sleep.

And while the idea of installing decorative lighting also drew broad support from the council, with Duran suggesting lights could “create the ambiance of the French Quarter” for a celebration of Mardi Gras, Councilwoman Lindsey Horvath pointed out that lights could also be used to increase public safety in the area.

“If we’re intentionally opening it up to the public, we need to make it a space that’s not creating problems,” she said.

But before any improvements can be made, the council members made it clear that the trash odor must be mitigated. City staff suggested screening and art could be used to hide the three dumpsters in the alley, including one near the basketball courts that’s shared by multiple businesses, but the council members said the real issue is the smell, not the visual aspect. The odor, which Duran called “an affront” to diners, cannot remain if the alley is to be spruced up, the council members said.

Steve Campbell, the city’s director of facilities and recreation services, said West Hollywood is moving to a “more aggressive” cleaning schedule of three times per week to help limit the smells, and Councilwoman Lauren Meister suggested planting jasmine or another scented plant to help mask the refuse’s odor.

“[If we do additional] cleaning and add in some fragrance, we think we can keep better control of [the smell],” Campbell said.

Meister and Duran said the rest of the work is dependent upon the success of the odor-control efforts, and the council directed city staff to return to a future meeting with an update on the enhanced cleaning regimen’s progress.

“We can do all of these wonderful things, but if we don’t get rid of the smell of the trash, it’s going to be for nothing,” Meister said.