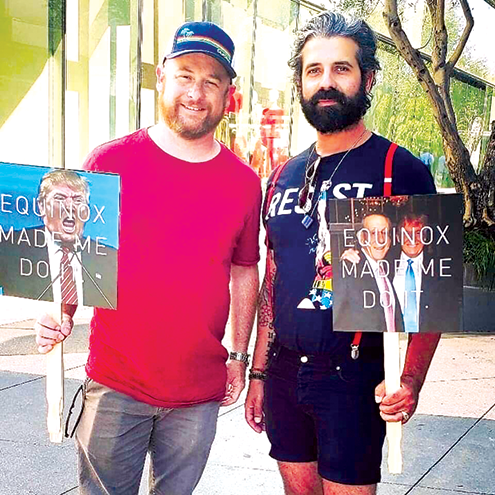 Adam Bass (left) and Gonzalo Garcia were among 100 people protesting outside an Equinox gym on Sunset Boulevard on Friday. (photo courtesy of Gonzalo Garcia)

Protestors appeared outside an Equinox gym in West Hollywood on Friday after it was revealed that the parent company’s owner, Stephen Ross, was holding a fundraiser for President Donald Trump’s re-election campaign.

“When we saw the news come out on Wednesday that Ross was holding a fundraiser for Trump, we got angry about it,” West Hollywood resident and protest organizer Gonzalo Garcia said. “I know so many people who use Equinox and SoulCycle.”

Garcia said rather than simply posting his disgust on social media, he and fellow West Hollywood resident Adam Bass created a Facebook event page calling for a protest outside the gym located on Sunset Boulevard. Though not a member himself, Garcia said he had a lot of friends with a gym membership. Close to 100 people came to protest, Garcia said.

He said the money that goes toward membership fees “works its way up to the top.”

“They’re supporting a man who’s feckless, xenophobic, homophobic and transphobic,” he said. “Helping him get re-elected helps with their tax breaks, and they’re not thinking about the country or the poor, the working class in the country. They’re thinking about what’s in their pockets.”

Protestors brought signs that read “Trump has no soul,” which incorporated the SoulCycle logo. Other signs included the phrase “Equinox made me do it,” a spin on the company’s fitness campaign slogan. One counter protestor appeared wearing a “Make America Great Again” hat, Garcia said, which riled the protestors.

“I was proud to support and stand with members of my community, who wanted to make clear that we won’t be members of clubs that support hate and that we don’t want our hard-earned dollars spent in support of a candidate who attacks our personal freedoms,” she said.

“We want to let you know that Equinox and SoulCycle have nothing to do with the [fundraiser] and do not support it,” Equinox’s statement read. “As is consistent with our policies, no company profits are used to fund politicians. In fact, we are committed to all our members and the communities we live in.”

Equinox believes “in tolerance and equality,” the statement continued, and Ross “is a passive investor and is not involved in the management of either business.”

Equinox employees did not provide a comment about the protest.

Ross is also overseeing the development of the Grand, a development in downtown Los Angeles that is expected to include a 20-story Equinox Hotel and a 39-story residential tower, expected to be completed in 2021. Garcia said he would look further into the development before deciding on any future protests.