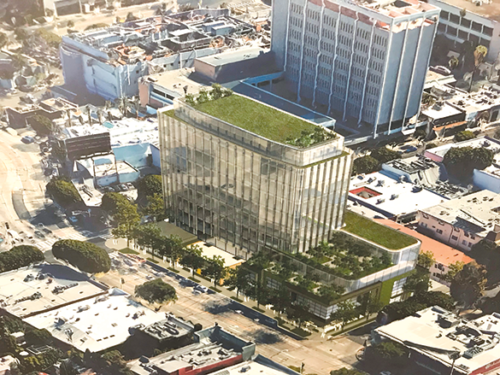 The proposed medical research center would replace three parcels and a public right-of-way alley on a nearly one-acre site. (photo by Ryan Mancini)

West Hollywood residents voiced concerns during a scoping meeting at the West Hollywood Library on Tuesday about a proposed development planned at the corner of Beverly and North Robertson boulevards.

The project would demolish buildings located at the site and replace them with a 10-story mixed-use office building. Though intended to be a cancer research center, it will also include an underground parking lot, retail stores, restaurant and café. The Charles and Ray Eames building will remain. Construction for the development would take 30 months.

Some audience members asked about the medical center’s proximity to Cedars-Sinai Medical Center and whether another center was necessary. Darren Embry, community development director of the real estate firm Faring, opened the meeting.

“In discussions with other healthcare providers in the southland, they are very enthusiastic about partnerships [with this new facility],” Embry said.

Greg Martin, project manager for environmental consulting firm Rincon Consultants, Inc., said the suggestions and concerns from the meeting would be followed by an Environmental Impact Report drafted by the city of West Hollywood in compliance with the California Environmental Quality Act.

Among the concerns were an increase in traffic, something residents said would not only impact the air quality and commutes to work but also home values. When asked why residents were not being asked directly outside of and prior to the meetings about how this new development would affect them, Martin said the meetings were that opportunity for a direct conversation.

“We understand that might seem sterile, but we are supposed to base our analysis on data and the people’s experiences and opinions that’s included in meetings like this and commenting on the EIR … ,” he said. “That’s how the process works.”

Martin confirmed traffic congestion would be taken into consideration, along with rising noise levels and the potential economic impact the development could have.

Visitors were dismayed when Embry confirmed the top level of the building would include a restaurant. While there is no confirmation, a restaurant has only been proposed, he said.

In the presentation, Martin noted other issues that will be analyzed by the EIR, including cultural resources, hazardous materials, water quality, public services and utilities.

Another meeting has not yet been scheduled, but will take place before the scoping period ends on Sept. 3, Embry said. Those with comments can submit them to West Hollywood Planning and Development Services Associate Planner Adrian Gallo by emailing agallo@weho.org.