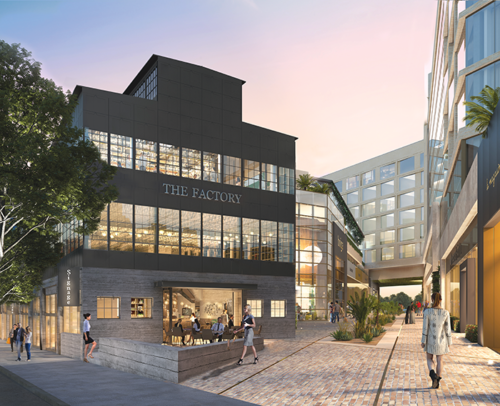 The 90-year-old Factory building was home to the Mitchell Camera Company and the influential LGBT bar Studio One. (rendering courtesy of Faring)

Changes to the Robertson Lane project in West Hollywood will keep intact more areas of the historic Factory building after the city approved the alterations earlier this month.

With the updated design, two buildings – a showroom and a retail structure – on Robertson Boulevard will be torn down, and as part of the 475,000-square-foot, nine-story project, 11 of the Factory’s 12 sections will be preserved. Only seven sections were included in the original plans.

In addition, the hotel building exterior was redesigned, and it will include 237 hotel rooms, four fewer than the 241 initially planned, and the project will utilize three levels of subterranean parking, not six. The hotel entrance on La Peer Drive was also redesigned, moving vehicles away from pedestrians on La Peer, and a driveway will no longer bisect the Factory building, which will be dismantled, rehabilitated and reassembled on a new location parallel to Robertson Boulevard.

“Now, it’s an even more pedestrian-friendly, accessible space for all the residents of West Hollywood,” said Scott Hunter, principal of HKS Architects, which designed the project.

Jim Arnone, an attorney with Latham & Watkins and land-use counsel for Faring, said no hotel operator has been selected yet.

Sixteen members of the public spoke in favor of the project’s approval, including Genevieve Morrill, president and CEO of the West Hollywood Chamber of Commerce, who praised the redesigned project’s 10,000 square feet of ballroom and event space and said such areas are something of which West Hollywood does not have enough.

Another public speaker, Roy Oldenkamp, a West Hollywood resident who spoke on behalf of the West Hollywood Preservation Alliance, lauded the efforts to save even more of the 90-year-old Factory building, which was once home to the Mitchell Camera Company and the influential LGBT bar Studio One, according to the Los Angeles Conservancy.

“Everyone I’ve spoken to in the preservation community is really jazzed about [the additional segments being preserved],” Oldenkamp said.

On its website, the Los Angeles Conservancy said it supported the changes when West Hollywood’s Historic Preservation Commission discussed them in June.

“Together, we found a way to strike a balance between old and new … We are very pleased that more of this building with important LGBTQ and early Hollywood production history will be saved and incorporated into the new project,” the Conservatory’s statement read.

During the Planning Commission’s meeting, the commissioners were mostly supportive and complimentary of the new plans.

“There’s absolutely nothing in this request for changes that I can see that does anything to detract from the original entitlement, but in fact, it does enhance it considerably,” Commissioner John Altschul said.

The only significant opposition came from Commissioner Lynn Hoopingarner, who raised questions about the project’s pedestrian accessibility along Robertson Boulevard and the valet-only parking system for all 750 vehicles the project will be able to accommodate, among other issues. Even with her concerns, however, Hoopingarner described herself as undecided during her comments, and she voted to approve the changes.

Commission Chair Stacey Jones also raised cocnerns, agreeing with Hoopingarner that the pedestrian engagement on Robertson Boulevard could be improved. However, she said she was not concerned about valet parking.

“We sent a man to the moon. I’m not terribly concerned that we won’t be able to figure out the parking situation there,” she said.