WeHo pulls rabbit out of its hat 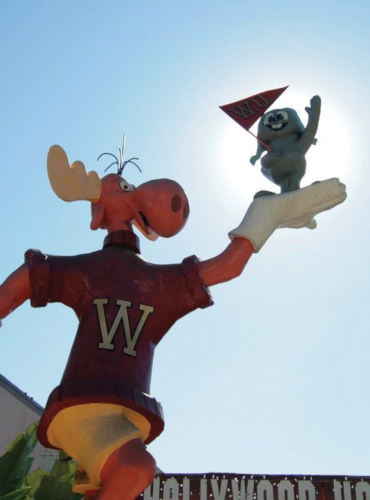 The 16-foot-tall statue of Rocky and Bullwinkle was removed from the Sunset Strip in 2013. (photo courtesy of Alison Martino/Vintage Los Angeles)

A statue of Rocky and Bullwinkle that was an icon on the Sunset Strip for decades is headed back to a prominent spot in West Hollywood.

The City Council voted unanimously on Aug. 19 to select the traffic triangle at Sunset Boulevard and Holloway Drive as the statue’s new home. Rebecca Ehemann, public art administrator for the city, said a 6-foot-tall pedestal will deter those who might try to climb the 16-foot-tall statue while allowing visitors to take photos with Frostbite Falls’ most famous residents. The city will pay $96,000 to construct the statue’s space.

“Bullwinkle will have his own place and will exist amongst the billboards as his own entity in the air,” she said.

The statue was first unveiled in 1961 in front of Jay Ward Productions’ animation studio at 8218 Sunset Blvd., where it was built as an advertisement for NBC’s “The Bullwinkle Show.” Over the years, Bullwinkle’s outfit was often repainted to parody the bikini on a nearby advertisement for the Sahara Casino in Las Vegas.

The statue has been missing from the Sunset Strip since 2013, when it was taken down for repairs, then put on display at the Paley Center for Media in Beverly Hills as part of the “Jay Ward Legacy” exhibit. The Ward family donated the sculpture to the city of West Hollywood so it could be put back on display, though outside of a brief appearance at City Hall in 2015, the statue has been in storage, awaiting a permanent home on the Sunset Strip.

Multiple public speakers came out to support the statue, including Tara Strong and Brad Norman, who portray the flying squirrel and moose, respectively, on the characters’ most recent iteration, “The Adventures of Rocky and Bullwinkle.” Strong and Norman used their characters’ voices to advocate for the statue, and Jay Ward’s granddaughter, Amber Ward, also urged the council to approve the construction.

“It would be fantastic to see the statue in its permanent location by the 60th anniversary on Nov. 19, 2019, of the first airing of ‘The Bullwinkle Show,’” she said.

Alison Martino, founder of the online community Vintage Los Angeles, also spoke in support of the statue, saying it provides a “whimsical presence” to the hotel-heavy Sunset Strip.

There was relatively little pushback to the proposal. One public speaker, Elyse Eisenberg, raised concerns about traffic, pedestrian safety and the visibility of the nearby traffic signal.

While council members questioned staff about parking and pedestrian issues to ensure the triangle is safe for those who wish to take photos with the characters, the council declined to have a new traffic study conducted.

“It’s just a statue … let’s get it up,” Councilman John Duran said.

Duran’s sentiment echoed public speaker Meredith Scott Lynn, an actress who noted that before it was removed, the statue was a point of reference for those giving directions in West Hollywood. Lynn said everyone seems to like the statue, so the obvious move is to put it back in place.

“There’s these two characters that make you smile. You drive by; you smile. It’s free; they donated it. Why not? … Let’s just put this statue up and enjoy it,” she said.

Park Labrea News and Beverly Press to be delivered on Friday, Aug. 23