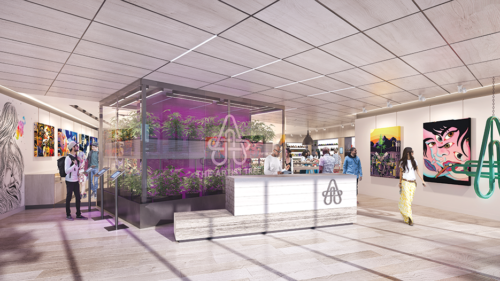 The Artist Tree will grow cannabis plants in its retail store, which will also feature local artists. (rendering courtesy of the Artist Tree)

Two more cannabis companies will be opening in West Hollywood. On Aug. 13, the West Hollywood Business License Commission voted unanimously to approve the business licenses for CALMA and the Artist Tree.

Aside from construction or renovation permits that might be required, the business licenses are the final requirement from the city.

The businesses received broad support from the commissioners, who raised a few concerns about traffic and safety but mostly liked the planned shops. Many of the owners and operators of other cannabis permit winners in West Hollywood spoke during the public comment portion of the meeting in favor of awarding the licenses.

Both businesses were granted licenses for adult-use recreational and delivery sales. The Artist Tree’s store will provide medical sales as well.

While the Artist Tree was awarded permits in all five categories in the city’s selection process – the only cannabis business to do so – this business license is only for the 8625 Santa Monica Blvd. location, which will house the dispensary and delivery side of the business and is expected to open in October. The other two permits, for an edible-only consumption lounge and a consumption lounge that allows smoking and vaping as well, will be for a different facility, said Lauren Fontein, a founder and owner of the Artist Tree.

“We decided to separate the businesses into two separate locations just because of the size we want to do for the lounge,” Fontein said. “We’re unable to find a property of fit both.”

The Artist Tree hopes to procure a site for its consumption lounge in the next month or so, Fontein said.

Aside from cannabis products, the Santa Monica Boulevard location will include educational and artistic areas, Fontein said.

The store will feature a rotating gallery of local art that will be for sale, said Aviv Halimi, a member of the executive team. The Artist Tree is working with the city’s Arts Division to find local artists to feature, and 100% of net proceeds will go to the artist, Halimi said.

“Every wall, every foot that we have, we’re trying to make a space dedicated to local art,” Halimi added.

The Artist Tree also plans to include a cannabis learning center, where customers – and adults 21 and older who wish to visit without purchasing anything – can get information about the regulatory environment regarding marijuana. The educational area will include live cannabis plants, which will be grown in an artistically designed cube so customers can see the development process.

“It’s primarily for the educational aspect because the yield won’t be huge, but we do expect to have some cannabis we can sell in the store. Anything that we can, we will offer to our customers under our own label,” Fontein said.

The Artist Tree also aims to contribute to West Hollywood by supporting local nonprofits and working with local LGBT groups. The business also plans to host food drives for Food Forward, a nonprofit that fights food insecurity and hunger. 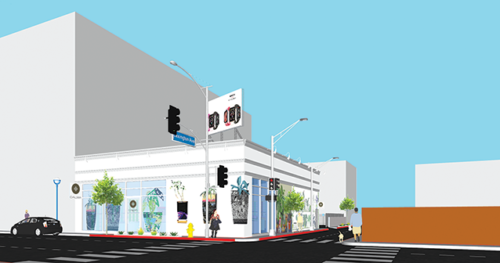 The business, to be located at 1155-1157 La Brea Ave., is trying to transform the cannabis store experience from one of an Amsterdam hash house to that of a perfume bar in Milan, Stevens said.

“Calma is the Italian feminine noun for tranquility, so that’s kind of the objective,” Stevens said.

The business will be decorated in pastel-colored art and will feature large windows looking out onto La Brea Avenue. Stevens said CALMA is working to build relationships with its neighbors, including the nearby Congregation Kol Ami, whose Rabbi Denise Eger opposed the recently approved Lowell Café at last month’s Business License Commission meeting. CALMA wants to connect with Kol Ami and other neighbors to coordinate security, as well as enhancements to cleanliness and homelessness in the area, Stevens said.

“We really want to be a productive force on this section of La Brea … We’re really focused on outcomes for our neighbors and for our customers,” Stevens said.

Like the Artist Tree, CALMA is also looking to create a positive social change.

The adult-use dispensary and delivery service will disregard nonviolent, cannabis-related convictions or incarceration among job applications. Additionally, a portion of each sale will be donated to the Black AIDS Institute, a Los Angeles-based think tank.

The business license commissioners said they were very impressed by CALMA’s plans for social justice and restorative justice.

“That’s what this is all about, and that’s what gets me excited,” Commissioner Keith Anthony said.