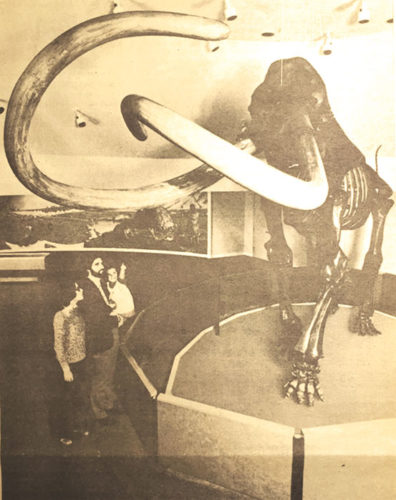 A photograph in the April 7, 1977, issue of the Park Labrea News showed a fossilized 12-foot-high, 20,000 pound imperial mammoth that was a centerpiece at the George C. Page Museum, which was scheduled to open that month at the La Brea Tar Pits. An accompanying article stated that excitement was palpable about the new museum, which would be the first comprehensive facility to display the multitudes of fossils found at the site and educate visitors about the history of the area during the Ice Age. Museum officials are currently looking at ways to reimagine the La Brea Tar Pits and its venerable museum, and input is being sought from the public. Three plans for the Tar Pits’ future were unveiled on Aug. 26.