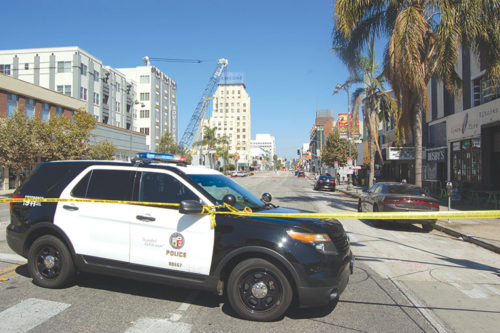 Police closed Wilshire Boulevard on Aug. 12 while detectives investigated a police “use of force” incident in which an assault suspect and officer were injured. (photo by Edwin Folven)

Wilshire Boulevard was closed between La Brea and Cloverdale avenues on Monday afternoon while police investigated an assault involving a male suspect and a Los Angeles Police Department officer.

LAPD spokesman Mike Lopez said police received a call at approximately 12:45 p.m. about an assault with a deadly weapon occurring near Wilshire Boulevard and Detroit Street. Officers found a man armed with a metal pipe, and a “use of force” incident occurred in which the suspect and an officer were injured.

Lopez said he did not know the extent of the force, but it did not involve an officer-involved shooting. The unidentified officer sustained minor injuries and was treated at the scene and released.

The suspect, who was only identified as a male adult, was taken into custody and treated for injuries. Detectives from the LAPD’s Force Investigation Division are overseeing the investigation. Wilshire Boulevard remained closed as of 3:30 p.m., and officers said the street would be reopened as soon as the investigation concludes.