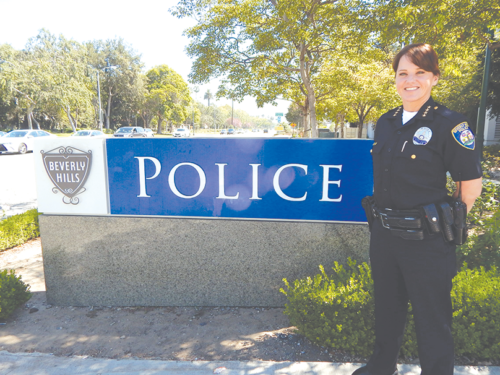 Settlements have been reached in three additional lawsuits by employees of the BHPD that claimed improper treatment by Chief Sandra Spagnoli. (photo by Edwin Folven)

“The city of Beverly Hills is committed to maintaining a respectful work environment free from harassment, retaliation and discrimination,” Beverly Hills City Attorney Laurence S. Wiener said in a statement. “We have managed to reach agreements without the cost and distraction of trials so that the Beverly Hills Police Department can focus on its primary responsibility, keeping our community safe.”

The settlements follow a jury verdict in July in which the city was found liable for workplace retaliation and harassment in a case filed by four current members of the Beverly Hills Police Department who alleged they were discriminated against by Spagnoli. Although the jury determined some statements made by Spagnoli qualified as harassment or retaliation – an assertion the city disagreed with – and awarded the employees $1.1 million, it did not rule that discrimination occurred.

The city also previously settled a discrimination and harassment lawsuit filed by former Capt. Mark Rosen against the city for $2.3 million, and former employee Clark Fogg, who worked in the forensics laboratory, for $300,000. Both Rosen and Fogg retired after the settlements were reached.

Attorney Bradley Gage represented all nine plaintiffs. The most recent settlements, which were reached last week, were for lawsuits filed by Officer Anne Marie Lunsman and Sgt. Scott Dibble, as well as administrative assistant Tania Schwartz. Lunsman and Dibble still work for the BHPD, while Schwartz has voluntarily moved to another city department, Gage said.

Gage confirmed the total settlement amount was $975,000. He would not confirm the amount he is receiving for fees.

The attorney said he hopes the settlements will prompt the BHPD and the city to improve policies and administrators’ treatment of employees. The recent settlements conclude the multiple lawsuits Gage has been involved with against the city.

“My goal is to get justice for my clients and create a more tolerable work environment for them,” Gage said. “Basically, we hope the city takes corrective action.”

The Beverly Hills City Council continues to support Spagnoli, who was hired as chief in 2016. Prior to her hiring, an independent report by Management Partners firm analyzed BHPD policies, hiring practices and disciplinary processes, and made recommendations for improvements. The City Council called for the analysis to improve the department overall, fill vacant positions and boost morale.

At a council meeting earlier this year, Management Partners representatives said the city has been making progress. The firm interviewed 25 randomly-selected sworn and civilian department employees and determined that the “overall organizational climate and morale in the department are good.”

“The city supports the needed change that Chief Spagnoli has brought to the police department, including the addition of officers, enhancements in training, an increase in diversity, greater public outreach, contemporary policing programs and a reduction in crime,” the statement from the city of Beverly Hills read.