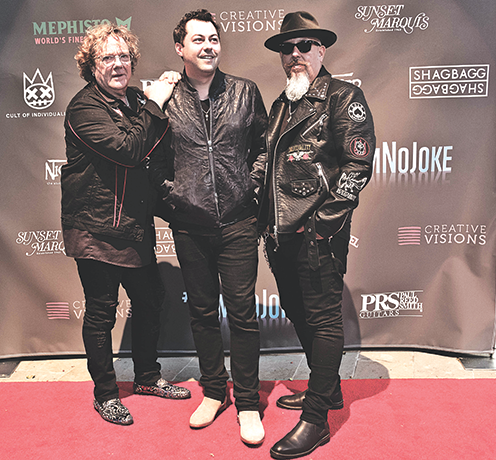 On Aug. 23, hundreds gathered at the Sunset Marquis in West Hollywood for a concert benefiting the #IAmNoJoke campaign, an organization started by singer/songwriter Andrew Cole that is dedicated to presenting a united front against bullying in all its forms.

The #IAmNoJoke project was born out of Cole’s desire to write a song for the victims of bullying. As someone who suffered childhood bullying himself, he felt it would be empowering for others to know they weren’t alone.

“But the thing is that I’m nobody, so I have to build an army,” he explained in a documentary about his campaign. Cole has been able to recruit celebrities like Jeff Goldblum, Chad Smith, Slash, Sir Patrick Stewart and dozens more to be a part of the project.

#IAmNoJoke is part of #WhoCaresIDo, a Creative Visions’ anti-bullying coalition and international campaign inspired by Paul McCartney’s song “Who Cares.” Led by Creative Visions, an L.A.-based nonprofit that pushes for change through impact storytelling and creative activism, the campaign is galvanizing youth, adults and organizations to help end bullying and hate through the power of media, art and music.

Event co-sponsors included Mephisto Footwear and Cult of Individuality. The campaign is ongoing and contributions can be made by visiting creativevisions.org.