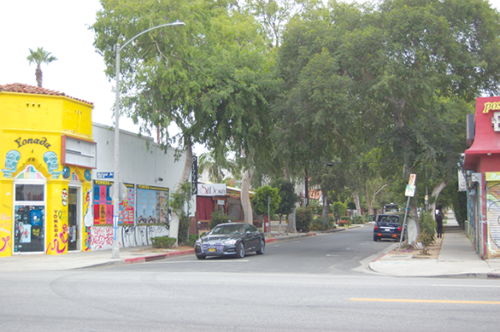 Plans have been withdrawn for a public plaza on Stanley Avenue that would have closed the road to vehicle traffic north of Melrose Avenue. (photo by Edwin Folven)

The Melrose Avenue Business Improvement District has scrapped plans for a community plaza on Stanley Avenue after opposition surfaced from community members and businesses in the area.

The Melrose BID, along with the Mid City West Community Council, had proposed permanently closing Stanley Avenue, just north of Melrose Avenue, to create an area where people could gather and interact. The plan called for tables, chairs and street furniture to be placed there during the day and removed at night. Mid City West created a similar public space for one day in 2017 during an observance of Park(ing) Day, an annual date when communities consider how parking spaces can be transformed into gathering places. After hearing concerns about the Stanley Avenue Plaza, the Melrose BID decided to withdraw the plan.

“We have heard the residents of Stanley Avenue express opposition to the proposed project and [Melrose BID is] withdrawing from it to consider other alternatives for community improvement,” the BID’s Executive Director Donald R. Duckworth said in a letter to residents. “This is consistent with council office thinking and best allows for other project opportunities in the future.”

Duckworth could not be reached for comment. Scott Epstein, chair of the Mid City West Community Council, said he was disappointed about the decision to withdraw the project.

“I think Mid City West worked very hard on this, and many, many community members in the broader community were excited about it,” Epstein said. “There were some folks on Stanley Avenue that were very concerned about the project. The goal was to create a public space for the community to enjoy.”

While plans called for the street furniture and amenities at the plaza to be packed up at night, Stanley Avenue would have remained closed to traffic, which concerned residents because they thought emergency vehicle access could be jeopardized. Residents were also worried about homeless individuals congregating in the area and a criminal element the plaza might attract.

“They pulled the plug on the plaza. It was an ill-conceived idea,” said Peter Nichols, co-founder of the Melrose Action Neighborhood Watch. “Neighbors opposed to this plan are thrilled that they did the right thing and listened – finally – to neighbors’ concerns.”

“The neighborhood was very united in agreeing that this location was not suitable for this particular project,” added Karen Hebert, of Stanley Avenue. “It would not improve our quality of life, safety or security. Merchants in the area likewise agreed. We are all pleased with the outcome.”

“There was overwhelming opposition,” she added. “He listened, he heard, and they pulled it off the table.”

Epstein added that the community council is interested in finding other ways to improve Melrose Avenue, such as creating more shade, while ensuring that residents’ concerns are heard. Although opposed to the Stanley Avenue Plaza, Hebert remained open to ideas about improving the area.

“In the future, if Melrose BID has a mutually beneficial project that we can support, we look forward to working with them,” Hebert said.