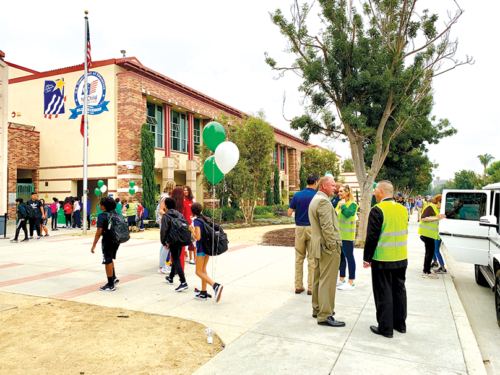 Beverly Vista Middle School students arrive on campus for the first day of school with the guidance and supervision of school and district officials. (photo courtesy of Beverly Hills Unified School District)

With new security systems and traffic configurations in place, the Beverly Hills Unified School District opened its campuses to students for the first day of school on Monday.

Horace Mann and Hawthorne schools opened their campuses to K-5 grade students, while Beverly Vista Middle School opened its doors with a ribbon-cutting ceremony after welcoming, for the first time, 6-8 grade students to its campus.

The morning began using new traffic configurations for dropping off students, as well as afternoon pickups. Parents received short videos by the district provided the week before with strategies to adjust to staggered drop-off times and guidance for using pedestrian routes and arriving earlier. The new drop-off system left Superintendent Michael Bregy, who was among the district staff members who greeted families as they dropped off their children for school outside Beverly Vista, “pleasantly surprised.” Traffic conditions were smooth on the first day of school, Bregy said.

“This is the first time I’ve directed the administration to be out and about [guiding students to campus] because the parents know who we are,” he said. “If we’re asking parents to pull [forward], they know that’s somebody from the school and they followed their directions. I think that’s the key thing for traffic mitigation is having adults out there being engaged in it instead of just hoping for the best [for their child].”

In the coming weeks, he expects to receive input from parents as to what the district can do to improve this new process. Beverly Hills Police Special Operations Capt. Mark Miner also said it went smoothly, even with a larger flow of vehicles.

One issue is managing traffic at pedestrian crossings, Miner said, which halts all oncoming cars. The goal is to help large groups of people quickly and safely cross the street. For the first two weeks, Miner said BHPD motor officers will be on standby, with bike officers located at Beverly Vista and four police officers located at Hawthorne and Horace Mann.

Managing traffic during afternoons becomes easier when schools begin their after-school programs, where fewer students are leaving all at once, Miner said.

“Pickup is less hectic than drop-off,” he said.

NASTEC security officers using the Raptor system, which flags any problematic or dangerous visitors arriving to campus, scanned identification cards and student IDs. Schools also implemented a new “game-changer” in maintaining communication with the Beverly Hills Police Department, Bregy said, using a software program called Share 911. This interactive database provides alerts on the safety and security of students and staff while keeping police officers up-to-date if a campus is on lockdown.

“What’s great about it is you have this [new safety] opportunity because it’s interactive,” Bregy said. “You never know when something’s going to change [when there’s an emergency]. So in other words, it used to just be the principal [alerting staff during an emergency] and if the principal can’t see or hear anything, then how do you communicate out to the rest of the staff that conditions have changed? In an emergency, conditions are always changing, and so that’s where this particular software becomes really engaging for teachers.”

BHUSD is among several school districts across the country using Share 911. The next phase will be to incorporate new software, with the help of security consultant iXero, to detect behavior and check social media for problematic posts, Bregy said. The software will be run through the school, Bregy said, noting that it’s not typical for schools to use such technology, but BHUSD will follow all legal protocols and protect students’ confidentiality.

“We’re at a stage now where information sharing is critical to what we’re going to do,” Bregy said, “because we just can’t wait [until something happens] anymore.”