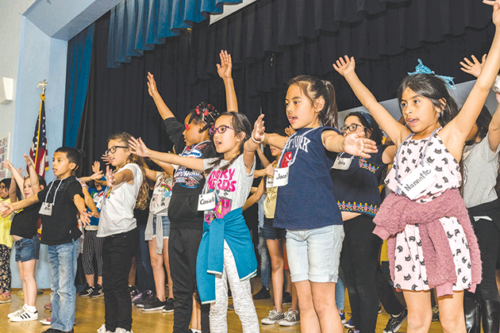 Students star in shows such as “Aladdin KIDS” and learn about theatrical production during the Center Theatre Group’ annual Disney Musicals in Schools program. (photo by Hal Banfield)

Center Theatre Group will select four public elementary schools to participate in the Disney Musicals in Schools Program and is currently accepting applications for the 2019-20 season.

In 2017, Center Theatre Group was awarded a grant from Disney to bring the program to Los Angeles. An initiative developed by Disney Theatrical Productions, the program creates sustainable theater programs in under-served elementary schools.

The selected schools will participate in a free 17-week musical theater residency, led by a team of teaching artists trained by Center Theatre Group and Disney Theatrical Productions. Each school will receive performance rights, education support materials and guidance from the teaching artists.

The program has a professional development focus through which participating school teachers partner with teaching artists to learn how to produce, direct and choreograph musicals, culminating in a 30-minute Disney KIDS musical at their school. Center Theatre Group will also host a Student Share Celebration in which each school performs one number from their show on the Ahmanson Theatre stage for an audience of students, teachers, family and community members.

Disney Musicals in Schools was launched in 2010 in response to a concern that under-resourced public elementary schools were not afforded equitable access to the arts. After successfully offering the program in New York City schools, Disney Theatrical Productions began partnering with organizations in other communities throughout the United States.

Disney KIDS musicals are 30-minute shows for elementary school performers that have been adapted from the classic Disney films “101 Dalmatians,” “Aladdin,” “The Aristocats,” “The Jungle Book,” “The Lion King” and “Winnie the Pooh.”

Public elementary schools with Title 1 status (campuses with large numbers of students from low-income families) are eligible to apply. The deadline is Friday, Sept. 19. For information, visit ctgla.org/disneymusicalsinschools, or email dmis@ctgla.org.