Safety first! Be watchful for kids walking to school 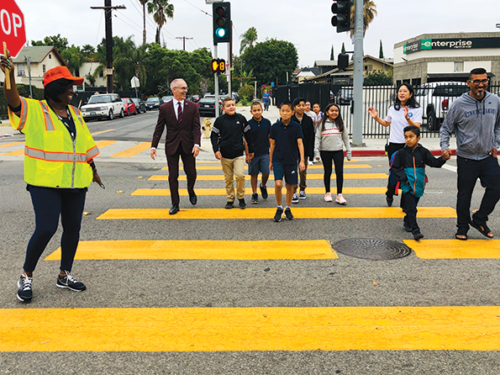 On Aug. 23, Los Angeles City Councilman Mitch O’Farrell, 13th District, participated in a ceremonial “first crossing” of the crosswalks at the intersection of Vine and Romaine streets in Hollywood, next to Vine Street Elementary School.

O’Farrell was joined by the Los Angeles Department of Transportation and Vine Street Elementary students, faculty and parents in dedicating a recently installed traffic signal and pedestrian crosswalk.

O’Farrell has made pedestrian safety and accessibility along major corridors and around learning institutions his top transit priority since he took office in 2013, and the newly installed devices will create safer access for residents and students near Vine Street Elementary School.

“We dedicated a pedestrian-activated, high-visibility crosswalk with a four-way signal at Romaine Street next to Vine Street Elementary. Now it’s safer for families and school children to cross the street,” O’Farrell said.