Ryu proposes multifaceted approach to fight against homelessness in L.A. 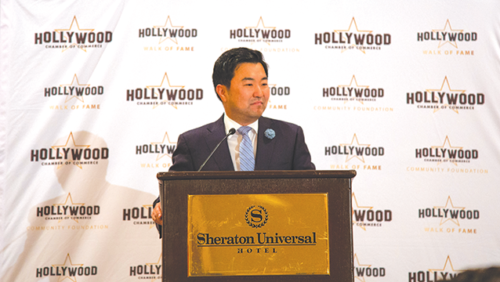 At an Aug. 22 lunch hosted by the Hollywood Chamber of Commerce at the Sheraton Universal Hotel, Los Angeles City Councilman David Ryu, 4th District, explained his three-pronged plan to combat the homelessness problem in Los Angeles, which he called “the crisis of our time.”

Ryu said multiple factors have to be addressed simultaneously for real progress to be made in reducing the number of people experiencing homelessness.

First, the city must rehouse those currently experiencing homelessness, Ryu said, a goal the city is actively working toward. As examples of progress, Ryu pointed to projects already underway in his district, including a bridge housing center for women that’s expected to open in a few weeks and a home for transitional-aged youth on Hollywood Boulevard.

On Aug. 27, Ryu also co-introduced a City Council resolution to support Assembly Bill 1187 by Assemblyman Miguel Santiago (D-Los Angeles), which would speed up construction of publicly-funded housing by exempting them from reviews required by the California Environmental Quality Act.

However, building homeless housing alone won’t be enough to make a noticeable difference, as there are tens of thousands of people becoming newly homeless each year, Ryu said, and “we must stop the bleeding.”

“If we only build housing for the homeless, we will not solve this problem,” Ryu said. “For change to occur, we must bring down the cost of housing. We must address the needs of affordable renters, and we must save Los Angeles’ middle class.”

Ryu said housing for moderate-income people in particular is something Los Angeles sorely lacks as the group has been overlooked in projects that build more housing units.

“Middle class, they are the teachers, the firefighters, the construction workers who are actually building these homes but can’t afford to live in them,” Ryu said.

Ryu’s third prong involves increased mental health services, especially for those who need it most. In Los Angeles, mental health care can only be provided to those who willingly accept it, except for cases of potential harm to self, harm to others or the “gravely mentally ill,” Ryu said.

“I can tell you without a doubt that we are failing to meet the mental health crisis on our streets, and ignoring this problem will make it much worse,” Ryu said.

“Even if every mentally ill or addicted person experiencing homelessness were able to come in tomorrow to seek help, it takes us back to prong one: We have nowhere to put them. We don’t have enough homeless housing. This is why we have to push all three prongs at the same time,” Ryu said.

Ryu acknowledged that his plan is an ambitious one, but he views his “role at City Hall as a reformer, as an innovator and an outsider.”

“I believe in thinking big and taking on old problems with a new approach and fresh ideas. [This begins with] building consensus and by including more voices and engaging the community,” Ryu said.

He added that real success in the fight against homelessness will likely require the public to pitch in, for instance by finding or providing lots for safe parking, underused properties for temporary housing and more.

At the end of his speech, which received a standing ovation from the crowd, Ryu encouraged Angelenos to “listen to our better angels” and work together on big ideas so “we can get things done.”

“There is no silver bullet or easy answers, only hard work and a comprehensive approach and having the courage to pursue new ideas,” he said.

Dear Councilman Ryu–You must do what you can to stop landlords from evicting tenants in order to sell out to luxury condo developers. Also, please address rent control. Much homelessness is the result of stagnant wages and rising rents. Landlords need to be regulated and tenants must be protected from developers and opportunist landlords. The increase in homelessness in our city is directly related to the increase in luxury condo development.