Public calls for gun legislation in wake of mass shootings 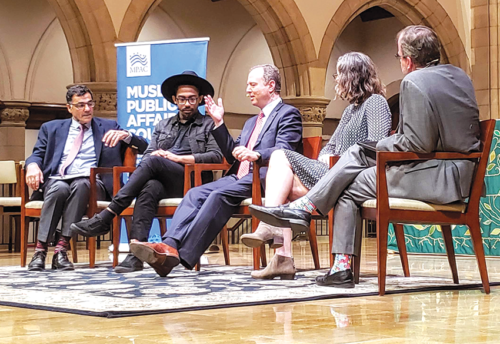 U.S. Rep. Adam Schiff (center) spoke in favor of background checks and against assault weapons and racism at the Countering White Supremacy forum at All Saints Church in Pasadena on Aug. 5. (photo by Cameron Kiszla)

At the Aug. 5 Countering White Supremacy forum at All Saints Church in Pasadena, U.S. Rep. Adam Schiff (D-Burbank) advocated for what he called the “simplest, most obvious thing to do,” enacting requirements for universal background checks for gun sales and banning assault weapons.

“Making guns harder to get and less deadly won’t stop hate, but it will save lives,” Schiff said.

As things currently stand, the Senate cannot take action on those bills until they return to session next month, but Schiff – and many other Democrats – would like to see that change.

“Mitch McConnell must stop blocking action, and he shouldn’t wait until September. He should call the Senate back into session this week,” Schiff said.

Politicians on a more local level are taking action as well. Prosecutors Against Gun Violence, which is co-chaired by Los Angeles City Attorney Mike Feuer, will host a summit on mass shootings this October in Las Vegas, which two years ago was the scene of the Route 91 Harvest music festival massacre. The summit, called “The New Norm: Mass Shootings in America,” will “grapple with this most pressing challenge,” Feuer said.

“Our nation has been shaken to its core by the horrific mass shootings in Gilroy, El Paso and Dayton,” Feuer said. “Through federal inaction fueled by cowardice, these shootings – and everyday gun violence in general – have touched the lives of all Americans. It’s got to stop.”

A recent proposal by Los Angeles City Councilman Mitch O’Farrell, 13th District, aims to make progress toward reducing gun violence as well. On July 30, O’Farrell put forth a motion to have the Los Angeles Police Department track and report on the guns officers seize.

O’Farrell’s motion said he’d like for the LAPD to see where those guns came from, if they are registered to the person from whom they were confiscated, and if the guns are legal under California law. California has strict gun laws, but other states like Texas and neighboring Arizona have less restrictive rules, allowing weapons that are legal there to be brought back to California, O’Farrell said.

“We should not sit by and accept that people in California are going to be victims because other states have lax gun safety laws,” O’Farrell said.

O’Farrell said this motion came before the recent mass shootings, but those tragedies make his proposal “even more relevant.” O’Farrell’s motion referenced the Gilroy shooting and LAPD Officer Juan Diaz, who was killed last month while off duty at a Lincoln Heights taco stand.

O’Farrell also expressed support for similar gun control measures to what Schiff proposed on Aug. 5 and encouraged Republicans to allow regulations supported by a majority of Americans to be put in place.

While stricter gun regulation is likely to make an impact in reducing victims of hate crimes, Schiff said the root causes must be addressed as well. Internet companies should not amplify the messages of white supremacists, he said, and the companies that enable websites that are home to white supremacist forums should part ways.

Schiff also singled out President Donald Trump, a frequent opponent, for using language like “invaders” and “infestation” to describe people of color, which Schiff said contributed to the recent racially based attacks.

Racist ideologies belong in “the dustbin of history,” Schiff said, adding that he strongly opposed Trump’s efforts to be re-elected in next year’s race for president.

“We must stand together as Americans,” Schiff said. “Nothing will bring back the victims in El Paso or other hate crimes, but we can and must defeat the ideology that took their lives.”