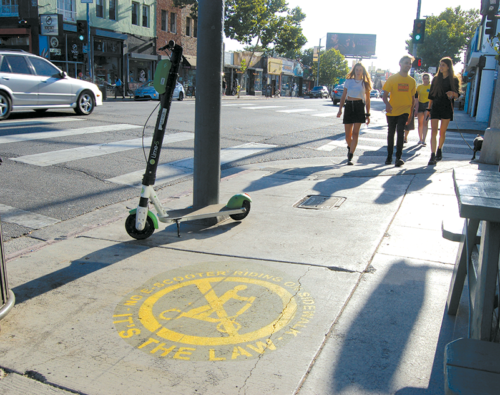 Signage stating that riding e-scooters on sidewalks is illegal has been installed on Melrose Avenue and Third Street. (photo by Edwin Folven)

The Los Angeles Department of Transportation has installed signage along Melrose Avenue and Third Street warning people that riding e-scooters on sidewalks is illegal.

The signage comes in the form of decals that are affixed to the sidewalks in areas where scooters are prevalent. Forty-three of the decals – which state “No E-Scooter Riding on Sidewalk – It’s the Law” – have been placed along the two streets in a pilot project requested by Los Angeles City Councilman Paul Koretz, 5th District. Plans call for more to be installed along other major thoroughfares where e-scooters are available for rental.

“I continue to be very concerned about the e-scooter explosion here in Los Angeles and decided to proactively alert riders of the illegality of riding on sidewalks for the safety of the pedestrians in my district,” Koretz said. “In addition to my concerns about riders on the sidewalks, I am equally worried about e-scooter riders’ own safety entering commercial traffic. In reality, there are few places where e-scooters can be ridden safely. Moreover, almost 100% of the riders are irresponsibly not wearing helmets while the large and growing numbers of scooter-related injuries continue unabated. I would be thrilled to see e-scooters banned until we have an adequate bicycle/e-scooter lane infrastructure for them. In the meantime, I am hoping these decals can alleviate some of the e-scooter danger occurring in my district.”

The signage debuted last week and is part of a multi-pronged approach LADOT is taking to ensure the safety of e-scooter riders and pedestrians. Last September, the Los Angeles City Council approved e-scooter and dockless vehicle regulations under a pilot program. One-year operating permits were issued earlier this year to eight companies offering dockless transportation modes (e-scooters and electric bicycles) and the department is will be evaluating the system through the beginning of next year.

The permits require companies to have “no riding on sidewalks” messages on the floorboards of every dockless vehicle, said LADOT spokeswoman Nora Frost. Companies are also required to provide user education information about safe riding and the rules of the road in the apps used to operate the dockless transportation modes. Companies such as Lime and Bird offer free helmets through the app, but many riders do not use them.

“The city of Los Angeles developed the dockless mobility pilot program to ensure safety for Angelenos as well as encourage a new form of transportation,” Frost said. “LADOT is piloting different approaches to encourage good operator and rider behavior. LADOT continues to evaluate and refine this program to maximize benefits for every community. This includes piloting new tools to encourage safe rider and permitted operator behavior.” 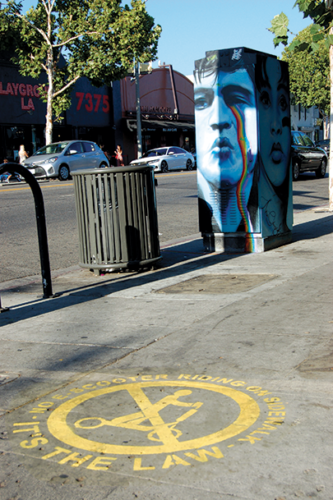 Los Angeles allows e-scooters and electric bicycles under the pilot program, but other cities have taken different approaches. Beverly Hills banned them. West Hollywood allows riders to pass through the city but the e-scooters and bicycles will be impounded if left there.

In Los Angeles, it remains unclear how effective the new signage will be in getting riders to stay off sidewalks, which many people describe as a safety issue.

“For us, these are a huge problem,” said Det. Maricela Sasaki, of the Los Angeles Police Department’s West Traffic Division. “Riding on sidewalks is illegal, but people do not seem to like to obey the rules. I get it, you might want to ride on the sidewalk because the street is congested, but if there are pedestrians, that presents a problem.”

Peter Nichols, co-founder of the Melrose Action Neighborhood Watch, added that he was pleased to see the new “No Riding E-Scooters on Sidewalks” signage in the Melrose District.

“It’s great, and it’s about time,” Nichols said. “It’s a real hot topic here. A majority of the scooters are rented on Melrose and people ride into the neighborhoods recklessly, on and off the sidewalks. I don’t think there is a neighbor out there who is not thrilled that the city is moving to enforce sidewalk safety and hopefully, the situation involving helmets.”