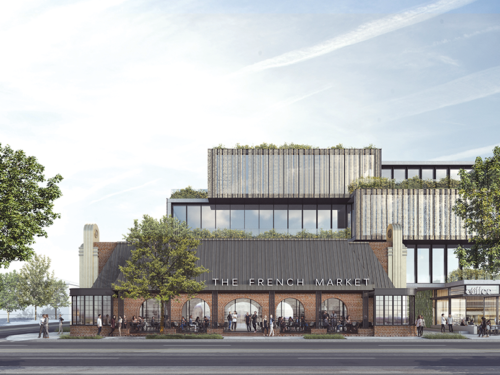 The exterior of the French Market building will be preserved as part of a four-story commercial building on Santa Monica Boulevard. (rendering courtesy of Faring)

The commission’s vote, which recommended the City Council certify the environmental impact report as adequate and approved a certificate of appropriateness for the property, allows the project to next go before the Planning Commission.

The French Market, which was built in the 1930s and is protected as a cultural resource, has served a variety of purposes, most recently as a restaurant that closed in 2015. In the 1970s and 1980s, the French Market was a place where members of the LGBTQ community could be open about their sexuality and shop, dine and date.

The project from the developer Faring aims to build a 60-foot-tall, 83,000-square-foot building that will be used for office, retail, design showroom, bar and restaurant space. The French Market building’s exterior architecture, including the mansard roof and Streamline Moderne-style pylons with bullseye designs, will be preserved, and one of the French Market’s walls will be adorned by a 92-foot-long mural by Judy Baca – designer of the “Great Wall of Los Angeles” mural that decorates more than 2,700 feet of concrete wall alongside the Tujunga Wash in the San Fernando Valley.

In the new project, the French Market is intended to house a restaurant, though no operator has yet been selected, said Jake Stevens, director of community engagement for Faring.

The idea of a potential restaurant was well-received by many in the room, who often used their own personal stories to explain the building’s significance. The project was largely lauded by the four commissioners in favor and all 13 public speakers, as well as 12 members of the public who submitted comment cards in support.

“Clearly, this space needs to be preserved for its importance to the community,” Commissioner Matthew Dubin said.

Levin and Ostergren, however, took issue with the way the French Market will be preserved. Ostergren said she’d like the interior of the space saved as well, though Faring’s plans to build a three-story underground parking garage mean the French Market’s roof and floor will need to be destroyed. The building has undergone multiple renovations, and the other commissioners, as well as the developer’s representatives, said the interior is not necessary to preserve the history.

“There’s been so many changes to it over the years, it would be hard to really, I think, say what would be historical about what was in there,” said Commissioner Lola Davidson. “I really do believe in my heart of hearts that what’s historical is the patio and the outside.”

Levin was dismayed with how little of the exterior would be retained, by his measurement, about two and two-thirds walls.

“This is a backward façade-ectomy,” he said.

Levin also referred to the U.S. Secretary of the Interior’s standards for rehabilitation, which say that in cases where new construction is added to a historic structure, if the new construction were to be torn down in the future, the historic structure should still be able to exist on its own. In this case, demolishing the four-story commercial structure would leave only a partial French Market structure, Levin said.

“If this project were to be removed, this building will have no integrity,” he said.

The other commissioners, however, said the LGBT history will be adequately honored in the portions of the French Market that will be preserved.

“I think that because the building is not historic as a result of its architecture, more as a sense of place, particularly being out front of the building and being able to be openly gay and proud and sitting in front of their meals … [I’m not] placing as much reliance on keeping up the interior,” Chair Jacob LaJoie said.