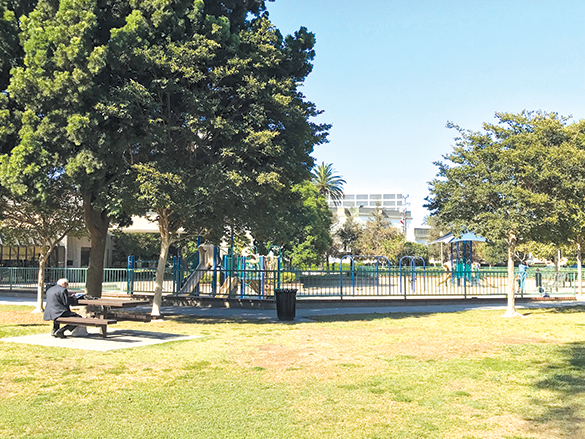 During Tuesday’s meeting, Rec and Parks commissioners shared concerns about the overall cost of the master plan project. (photo by Ryan Mancini)

City staff and the architectural firm Johnson Favaro also presented details of the master plan project during the meeting.

Following the public comment period, commissioners voted to submit the plan’s design and phase process to the City Council for consideration and approval, though they did not approve a motion to consider the cost estimate pending further review by the commission.

“I do think we need to be cost-conscious here, and I do think we need to be scale-conscious here,” Commissioner Julian Javor said. “I think that the architect team has done an amazing job of putting in everything that was asked of them. At this point, part of moving forward in this process needs to be looking at what [the costs are], because it is a little out of control.”

The first phase will include the construction of a new, six-story community center at the western end of the park, including a two-level parking garage, a gymnasium, indoor and outdoor tennis facilities and an aquatics center. Over La Cienega Boulevard, a deck bridging the two sides of the park will also be included with Phase 1 of construction. The cost for Phase 1 is an estimated $125.5 million.

The project’s second phase would cover field improvements on both sides of the park along La Cienega Boulevard, including more greenspace and an underground garage. Phase 2 is estimated to cost $33.9 million.

Javor said the cost for the community center parking garage, consisting of two levels and 250 spaces, was too expensive at $13.4 million.

“I look at above-grade parking to be a bit of an eyesore and major waste of space,” he said. “Either we could reduce the height of the building by moving parking underground or, if you didn’t want to do that, you could include so much more, possibly leasable space … that could actually create revenue for the city otherwise.”

Recreation and Parks Chair Alissa Roston said she did not think the projected costs were too high or “out of control,” and the architect had altered their plans based on previous community input.

“My recommendation would be that we send this proposal to [the City Council], as it is, with what has been laid out, because that is what the community asked for,” she said. “That’s why we did this long process.”

With the input of public comments, the plan will continue to be updated to address concerns and recommendations received by city staff. There will be more opportunities for community input over the next couple years before construction begins in 2021-22, Roston added.

The next town hall in which the public can give input will be on Sept. 25 at 6 p.m. at the La Cienega Community Center at 8400 Gregory Way. The City Council will be presented with feedback from the town hall and the Recreation and Parks Commission’s recommendations during an October or November meeting.