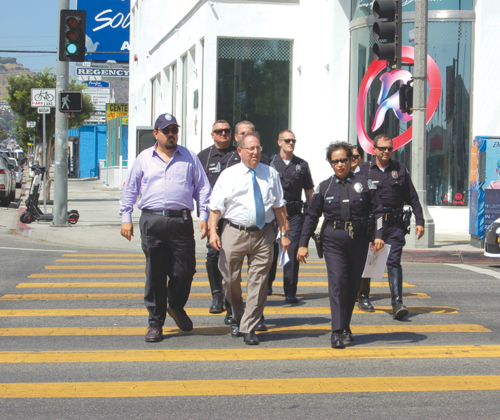 The Los Angeles Police Department launched a crackdown on e-scooters and e-bikes in the Melrose Avenue shopping district on Aug. 22, targeting people riding on sidewalks, violating a 15-mph speed limit and having more than one person on a single device.

Approximately 15 motorcycle officers from the West Traffic Division swarmed the Melrose area throughout the afternoon and cited people violating California vehicle codes. Citations carry a minimum $197 fine. Authorities did not have the number of tickets issued during the operation but said dockless vehicle violations are on the rise.

“We are trying to take a proactive approach,” said Capt. Elaine Morales, commanding officer of the West Traffic Division. “So far, year to date, we have had approximately 200 [e-scooter] citations, and half of those citations were given out to riders who were riding on the sidewalks.”

Lt. Lonnie Tiano stressed the importance of other e-scooter and e-bike regulations, including requiring riders to be over 18 and to have a valid driver’s license. Headlamps must be affixed to dockless vehicles after dark. People 18 and older are not required to wear a helmet under California law, but it is “highly recommended,” Tiano said. The operation on Aug. 22 was part of a larger crackdown on e-scooter and e-bike riding throughout the city.

“We are focusing our attention on scooters and scooter riding, whether it’s a scooter rider violating any kind of law or cars that are violating the laws, putting the scooter riders who are riding lawfully at risk,” Tiano added.

The enforcement operation was held in the Melrose area because a high-number of violations occur there, Morales said. Additional similar operations are planned in the near future. Police said warnings such as notices affixed to e-scooters and e-bikes telling riders they must stay off sidewalks are not working, so the next step is to start issuing tickets.

“If they are on the sidewalk and zipping along, they are going to get a ticket,” said Councilman Paul Koretz, 5th District, who joined LAPD personnel at a press conference at Melrose and Fairfax avenues during the middle of the enforcement operation on Aug. 22 to announce the e-scooter crackdown. “The primary thing we are focusing on is riding on the sidewalk, because that’s the most dangerous violation because you have the possibility of knocking over pedestrians.”

The crackdown came after Koretz worked with the Los Angeles Department of Transportation to have stencils painted on sidewalks in the Melrose area and elsewhere with the message, “No E-Scooter Riding on Sidewalk – It’s the Law.” The stencils were also painted as part of a pilot project on Third Street between La Cienega Boulevard and Fairfax Avenue, in the 100 block of The Grove Drive, and the 7900 to 8500 blocks of Beverly Boulevard. Koretz hopes education and warning signs will help alleviate problems, but citations are the next step.

“We have gotten scooter companies to write ‘no riding scooters on sidewalks’ on their scooters and everybody knows, and still many people are violating it,” Koretz said. “So the message is, we are cracking down on scooter violations. If you are riding three people to a scooter, you will get a ticket. If you are riding on the sidewalk, you will get a ticket. We are not just doing this today. We will do this every day until we get the message across.”

The Los Angeles City Council approved e-scooter and dockless vehicle regulations under a pilot program last September. One-year operating permits were issued to eight companies offering dockless transportation modes (e-scooters and e-bikes) and the Los Angeles Department of Transportation will evaluate the system through the beginning of next year. Each company was permitted to have 3,000 devices in the L.A. metropolitan area, with an additional 2,500 more placed in disadvantaged communities and 5,000 allowed in the San Fernando Valley. E-scooters and e-bikes must be returned to locations where they do not obstruct sidewalks and public rights of way, and away from handicapped zones and fire hydrants. People can report violations to the city by calling 311 or visiting myla311.lacity.org. Dockless vehicles that are left in the same location for more than five consecutive days are subject to removal by the city’s Department of Sanitation.

“Education is a component, but we are also giving tickets,” Morales added. “E-scooters are one of my top three priorities in the West Bureau. The other two are speed violations and pedestrian safety.”

I wish West Hollywood would take a page from LA on this. One office in front of City Hall and one in front of Joey’s would net dozens of illegal riders.