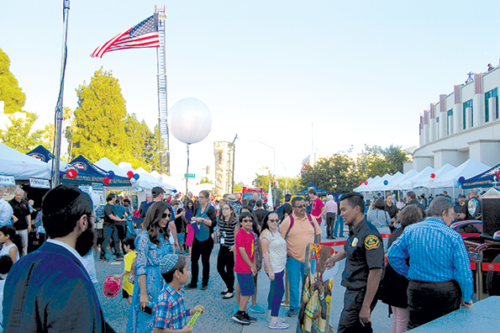 Hundreds of people attended the National Night Out festivities in Beverly Hills. (photo by Ryan Mancini)

Los Angeles, Beverly Hills and West Hollywood police departments closed down streets on Aug. 6 as residents and officers congregated for National Night Out in a show of community engagement and education.

The event is a nationwide take-back-the streets campaign for local law enforcement officials to improve communication and cooperation, as well as promote public awareness and safety with neighborhoods.

Each event provided families with information from different community resources, such as fire departments, hospitals and elected officials, as well as fun and educational games and activities for children.

“It’s just really an opportunity to showcase how intimate the community is with the police department, [to show] and you’re going to see them come out in bunches really until the end of the night and how supportive they are of the police department,” BHPD Assistant Chief of Police Marc Coopwood said. “It’s a very unique environment we get to work in. It’s just super neat to get to see that.”

Displayed near the Beverly Hills Public Library, guests could climb up a rock wall, sit inside an earthquake simulator or watch a puppet show inside the library. Children had the opportunity to safely douse a fire with the aid of Beverly Hills Fire Department officials and enjoy a 1928 Ahrens-Fox fire engine owned by the city. Coopwood said between 500 and 700 people attended over the three-hour span.

LAPD Sgt. A.J. Kirby said a number of visitors stopped by the National Night Out event at Poinsettia Park on Willoughby Avenue. In coordination with the Melrose Action Neighborhood Watch, the event served complimentary Pink’s Hot Dogs and hamburgers.

Kirby said a relationship started between the LAPD and the Melrose Action Neighborhood watch, which supported and embraced the police department.

“When it came to doing things, the community hosted meetings and things, [and] they were always first to say, ‘We want to do it,’” Kirby said. “Then when it came to National Night Out, they said, ‘Hey, we’ll hold the National Night Out event.’ In a sense, it’s been one of our better events over the years and that’s why we’re still here.”

Parked under a tree was an electric BMW resembling a police vehicle. Kirby said these cars will be used for the volunteer community patrol, where volunteers will receive training by the LAPD and have access to police radio. While they are non-emergency vehicles, the idea is for the volunteers to be “the eyes and ears of the community,” Kirby said. 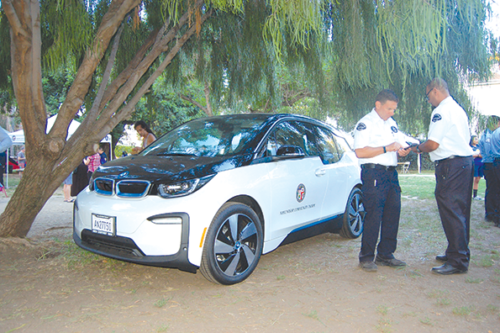 Los Angeles Police Department volunteers stand near a non-emergency vehicle used as part of a collaborative effort with the LAPD to bolster neighborhood safety. (photo by Ryan Mancini)

In West Hollywood, neighborhood watch and neighborhood associations, such as West Hollywood Gateway, the Russian Advisory Board and the West Hollywood Recreation Services Division, also participated in the National Night Out, which began earlier at 4 p.m. It also featured a screening of “The Lego Movie 2” at Plummer Park.

A short distance away, the Hollywood National Night Out set up along North Bronson Avenue and the adjacent parking lot. This event included a doughnut-eating contest and a pet parade. Guests ate pizza and listened to live music, while families played games, children hopped inside a bounce house or played “Dunk-a-cop.”

Despite getting dunked in water, Senior Lead Officer Brian White enjoyed his first year coordinating a National Night Out. White, of the Hollywood Division said the event gave him and other officers a chance to meet with members of the community on a person-to-person level as a way of strengthening bonds.

“Each of these communities that we deal with has their own individual personality and their own little culture to it,” he said. “You don’t get to know that unless you get immersed into it. That’s pretty much what it’s all about.”