Pedestrian killed in collision on Melrose 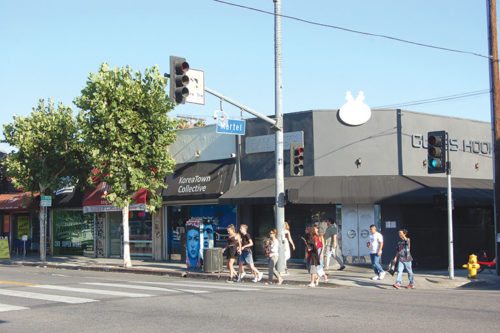 A pedestrian was killed by a vehicle that careened out of control after being involved in a collision at Melrose and Martel avenues. (photo by Edwin Folven)

A 24-year-old man from Sherman Oaks was killed on Aug. 1 when he was struck by a vehicle that was involved in a collision near the corner of Melrose and Martel avenues. Police arrested a 27-year-old driver who was allegedly driving under the influence when the crash occurred.

The collision occurred at approximately 10:30 p.m. when Jacob Gralitzer, who was driving a 2018 Infiniti Q60S eastbound on Melrose Avenue, collided with a 2017 Acura MDX that was making a left turn onto Martel Avenue from westbound Melrose Avenue. The Acura careened onto the sidewalk at the southeast corner of the intersection and struck the victim, Noah Benardout, who died from his injuries.

It was initially believed Benardout had been riding a scooter, but police now believe he was on foot and the collision knocked a nearby scooter over, said Det. Maricela Sasaki, of the Los Angeles Police Department’s West traffic Division.

“He was standing at the corner,” she added. “We are still trying to evaluate the evidence, but it is presumed he was not riding a scooter.”

Benardout was taken to Cedars-Sinai Medical Center, where he was pronounced dead. Sasaki added that because of the pending investigation, few details are available about the collision. Both drivers remained at the scene. Officers arrested Gralitzer because he exhibited signs of intoxication, but no information about blood alcohol level or possible alleged drug intoxication was available.

Gralitzer was booked for gross vehicular manslaughter while driving under the influence. He was released on $100,000 bail. Sasaki said charges are pending the outcome of the investigation.

Anyone with information about the collision is urged to contact West Traffic Division investigators at (213)473-0234. During weekends and off-hours, call the LAPD’s hotline at (877)LAPD247.

We have to make free rides more available and celebrate people who use them when either drunk high or dangerous at that moment to be operating any type of transportation Uber and ride sharing has actually increased dui and Dwight incidents in the last dozen + years as a simple kindness to transport someone a short distance for kindness sake is now a commercial affair and unlike a cab in the past,no longer anonymous as Im trying in vain to make this post!