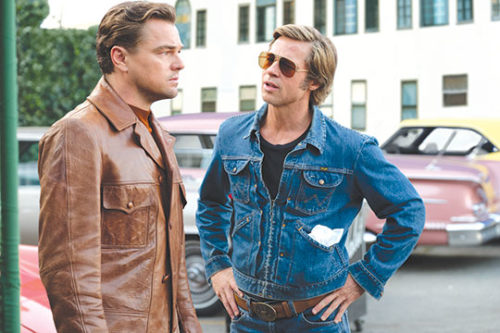 Once Quentin Tarantino retires after directing his 10th feature (if he sticks to statements made to the press), he’ll be a riveting cinema appreciation professor, the kind HR reps lose sleep over.

Each contribution drips with a wink, nod and fist pump to pop culture. As the penultimate auteur, he boasts a deep movie autobiography, lacing his body of work with homage and overt poaching. The result: quintessential postmodern art.

His films are splendid to discuss, and even more enjoyable as a kind of search engine that piques interest in all that source material. Unfortunately, Tarantino doesn’t always succeed in evoking that same delight without help from those hidden layers. Like a comedian explaining the punchline to a silent crowd, “Once Upon a Time … in Hollywood” requires too much explaining to be truly memorable. But hey, film profs are sure to reference it and use clips in the years to come.

To explain the whole of “Once Upon a Time’s” plot gives too much away. In short, Rick Dalton (Leonardo DiCaprio), and Cliff Booth (Brad Pitt) traverse a 1969 Hollywood scene in search of work. Rick once shined as a leading man, but as the industry moved on, he found solace as a leading small-screen villain, often relying on the help of Cliff, his trusted stuntman.

This happens amidst the evolving media landscape and impending Charles Manson (Damon Herriman) murders, more a presence than character, and a cult of hippies. While madness festers all around, Rick and Cliff spend most of their time indulging in drink and bemoaning their current state. Well, that’s more Rick’s problem; Cliff just smiles a lot and gets in his own way.

“The Hateful Eight” should’ve been a learning experience: edit that crap down. “Once Upon a Time” is long, and it feels long, inescapably so. In 1994, “Pulp Fiction” excelled at chatty discourse, astutely informing us all about the French name for a Quarter Pounder with cheese. Now, those rants are a trope, an obvious excuse for Tarantino to amplify his internal monologues. And he does it a lot over the course of 161 minutes here. When Rick’s preadolescent costar waxes pretentious on the set of a western TV series about method acting, the impact lessens in a Tarantino flick. It just feels like another round of inconsequential commentary from a man who never lacks something to say.

As usual, Tarantino on a mediocre day, still emits magnificent cinematography. Absent, however, are the signature chapter breaks. Rather than cut to the next subplot with a black screen and cutesy header, the camera does the work, floating from one residence to the next, skillfully emphasizing close proximity.

And, this one features our sassy director’s favorite playlist: references to Spaghetti Westerns, martial arts, anti-Nazi propaganda, dramatic driving sequences cut to the oldies, ironic sadism (his bread and butter) and regressive representations of women. Yeah, yeah, yeah, Tarantino apologists will most certainly defend him: “But ‘Kill Bill’ featured a strong rump-kicking heroine.” Sure, but he still spends a whole lotta time focusing on her feet. And, there’s that bit about Uma Thurman’s on-set injury due to director overreach. 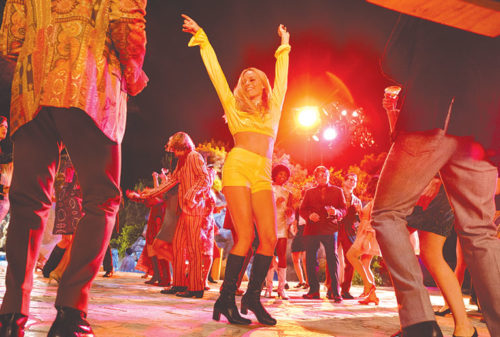 Margot Robbie stars as Sharon Tate in “Once Upon A Time … In Hollywood.” (photo by Andrew Cooper/© 2019 CTMG, Inc. All Rights Reserved)

“Once Upon a Time” plays like Robert Altman’s “Shortcuts,” displaying a series of disconnected shenanigans that rely on a climax that thematically puts all the pieces together: the murders ordered by Manson. While this interpretation of actual events enjoys a degree of violent catharsis, dear Quentin’s unique take on a Hollywood fairy tale sounds better than what happens on screen.

Meandering. And long. Frustratingly long. Like an hour too long. Something good might reside beneath the self-importance, but like too many other Tarantino films, this is more tedious than fun. Perhaps it’s worth seeing once for those rare humorous or clever moments, but reading an introduction to cinema book might prove more beneficial and far less frivolous. At least Al Pacino’s Marvin Schwarzs, a caricature of the Hollywood producer in search of the next big thing, is a quaint addition.

Community came out for Taste of Farmers Market