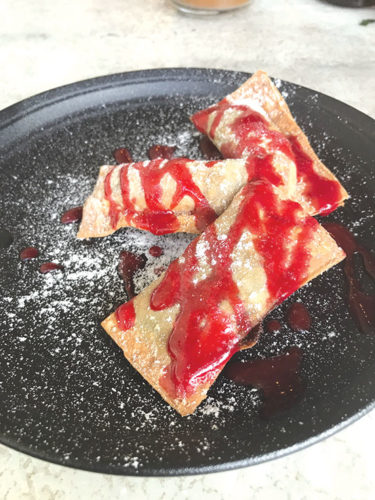 The banana and Nutella dessert delights with a drizzle of raspberry and chocolate at My Little Dumpling. (photo by Jill Weinlein)

Robert Mandler, the owner along with his son Anthony, is a successful Los Angeles restauranteur, since he founded Chin Chin in 1983. He introduced a modern Chinese chicken salad to L.A. and is known for his signature “dim sum and then sum.”

A Chinese chicken salad is featured on the menu, a nod to Mandler’s famous Chin Chin salad. This father and son duo recently invited guest chef Mako Tanaka for a month-long residency in the kitchen. Mako is expanding the menu with a few new salads, including charred baby romaine hearts with a ginger sesame dressing, as well as heirloom tomato salad with asparagus and avocado glazed with a plum boba vinaigrette. A healthy protein option includes seared ahi tuna with a spring mix and bite-sized Super Sweet 100 tomatoes dressed with a yuzu and caramelized onion dressing.

My Little Dumpling has a bar near the back that offers beer, wine and a variety of hot and cold teas to pair with the shareable dishes.

The restaurant’s signature dish, a cheeseburger dumpling, is filled with ground beef, caramelized onions and pickles. It was cut into three pieces and served with an Asian-style lychee ketchup for dipping. For those seeking a vegan option, they make a Beyond Meat dumpling filled with vegan “meat” and cheese, caramelized onions and pickles. It’s quite good, especially with the lychee ketchup.

Another vegan and gluten-free option is the potato pancake, made with shredded purple sweet potatoes and a black vinegar sauce. It’s similar to an enhanced potato latke.

There are a few soup dumplings, including one filled with crab, pork, ginger and scallions. Another is filled with French onion soup, gruyere cheese and a crouton.

They also create innovative sandwiches using bao buns. There is a braised brisket with slaw and horseradish and a vegan Indian favorite, Manchurian Gobi, filled with cauliflower, garlic and Fresno chili.

We finished with a fried rectangular dumpling filled with banana and Nutella. It was drizzled with raspberry sauce and a sprinkling of powdered sugar, a nice sweet treat.

Come in and try the fun dim sum dishes the Mandlers are creating at their newest endeavor.

‘Good Boys’ get into delightful, and sometimes funny shenanigans