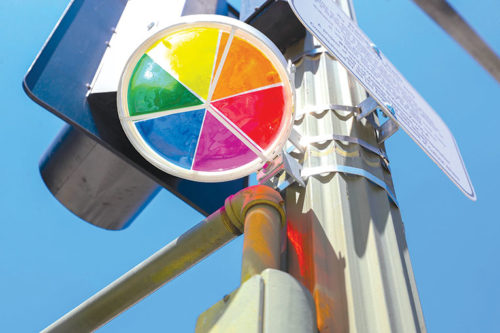 Plans call for Rainbow Halo memorials to be placed at locations throughout the city where fatal traffic collisions have occurred. (photo courtesy of LADOT)

Family, friends, advocates and city representatives dedicated the first of several Rainbow Halo memorials on Aug. 16 at Woodman Avenue and Addison Street in a portion of the 4th Council District in the San Fernando Valley

The memorial was placed near the scene of a hit-and-run collision that killed 16-year-old Conor Lynch during afternoon cross country practice in 2010. The Los Angeles Department of Transportation will install 100 Rainbow Halo memorials around the city to memorialize individuals who have died in traffic collisions.

“Even one life lost on our roads is one too many, and the tragedies these families have suffered can never be repaired,” said Los Angeles Councilman David Ryu, 4th District. “But our road design and driving behavior can. I’m honored to join with LADOT and these families to bring the Rainbow Halo Project to Council District Four as a solemn reminder of the lives lost to traffic collisions and the ongoing work to make Los Angeles streets safe for all.”

The Rainbow Halos are multicolored discs that hang overhead on a signal, light or signpost at or near the site of fatal traffic collisions. When sunlight shines through the disc, it casts a rainbow-colored shadow on the ground. An accompanying plaque explains the significance of the halo.

The memorials are part of the city’s Vision Zero Initiative, which brings together transportation planners and engineers, police officers, advocates and policymakers to create safer streets and reach a goal of zero fatalities. LADOT uses education campaigns and traffic-safety awareness efforts to encourage safety.

“Every year, more than 200 people die in tragic, preventable traffic crashes on our streets,” LADOT General Manager Seleta Reynolds said. “The Vision Zero Rainbow Halo LADOT commissioned is one small way to honor their memories, each with their unique story, represented by the rainbow in the halo’s reflection. We are grateful to the Department of Cultural Affairs for their support in allowing art to infuse our work.”

LADOT has partnered with Southern California Families for Safe Streets, a group of individuals who have lost loved ones in traffic collisions or survived severe crashes, to identify locations for the Rainbow Halo memorials.

“No one should experience the loss our family suffered. [Southern California Families for Safe Streets] members channel our grief into action to prevent others from enduring the same pain,” said Lynch’s mother, Jeri Dye Lynch. “By honoring those we’ve lost, we hope the Rainbow Halo project inspires people to join us in advocating for smarter street design, slower speeds and safer behavior.”

“Every 36 hours in Los Angeles, someone is killed in a traffic collision, leaving behind shattered families and communities throughout the city,” added Dr. Debbie Hsiung, co-founder of Southern California Families for Safe Streets. Hsiung’s 7-year-old son Aidan was struck and killed while they walked together in a crosswalk in 2014. “The Rainbow Halo project connects individual tragedies to collectively demonstrate the widespread public health problem that traffic violence has become. We know what needs to be done to end traffic deaths; this problem has clear solutions. But it will take every Angeleno prioritizing safety to end senseless traffic deaths.”

The project is part of the Department of Cultural Affairs’ and LADOT’s Creative Catalyst Program, which solicits proposals from Los Angeles artists and community organizers to develop and produce works related to Vision Zero. The two agencies commissioned artist John Morse to design the Rainbow Halos in 2017.

“Artists create sites of collective meaning and opportunities for the community to gather and reflect. Artists also bring attention and awareness to critical issues facing our city through creative symbolism,” said Department of Cultural Affairs General Manager Danielle Brazell. “The mayor’s Vision Zero initiative and the Creative Catalyst Program [are some] of the ways we intervene to ensure civic repair, support and connection to the neighborhoods we serve.”

To honor someone lost in a traffic crash with a rainbow halo, email socalsafestreets@losangeleswalks.org.