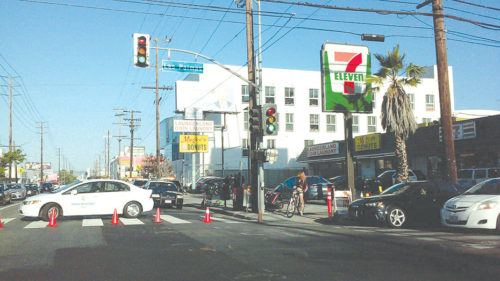 Authorities closed Santa Monica Boulevard on Aug. 21 to investigate a collision between a vehicle and pedestrian. The man who was struck died two days later in a hospital. (photo by Edwin Folven )

A 25-year-old man was struck and killed by a vehicle on Santa Monica Boulevard during the early morning hours of Aug. 21, and police have determined the collision was an accident.

At approximately 5:35 a.m., the victim was crossing Santa Monica Boulevard west of Las Palmas Avenue when he was struck by a 1996 Ford pickup traveling westbound on Santa Monica Boulevard. The driver pulled over and attempted to render aid, as required by law, said LAPD spokesman Tony Im. Police were called and arrived a short time after the collision.

“There was no arrest. There were no alcohol or drugs involved,” Im added. “It was strictly a traffic accident, and the driver stayed at the scene.”

The victim, Wayne Adams, of Los Angeles, was taken to a hospital, where he died two days later. Santa Monica Boulevard east of Highland Avenue was closed for hours on Aug. 21 while officers investigated the collision. Im said Adams was not in a crosswalk when he was struck.