Looking to make a splash 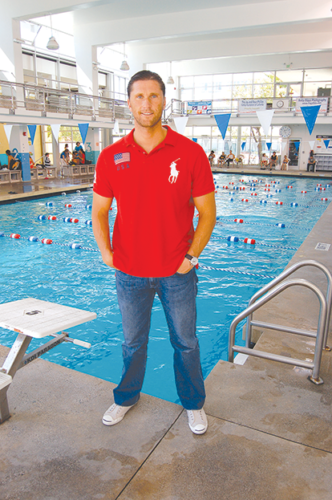 Lenny Krayzelburg is general manager of the LA Current, a professional team competing in the International Swimming League. (photo by Aaron Blevins)

In the late 1990s and early 2000s, Lenny Krayzelburg was one of the top swimmers in the world. The Fairfax High School and USC alum set world records in the 50-, 100- and 200-meter backstroke and took home three gold medals at the 2000 Olympic Games in Sydney, followed by another gold in 2004 in Athens.

He retired from competitive swimming in 2006, but he’s still involved in the sport. In 2005, he invested $100,000 in the Westside Jewish Community Center, one of his early training grounds after his move from to the U.S. from the Ukraine – then still a Soviet Republic – as a teenager. That project evolved into Krayzelburg’s business, a multi-state swim academy called the SwimRight Academy Championed by Lenny Krayzelburg, which includes a location at the Westside Jewish Community Center, fittingly located on Olympic Boulevard. At Jewish community centers outside of L.A., the business is known as the Lenny Krayzelburg Swim Academy.

The swimmer is expanding his competitive reach as general manager of the International Swimming League’s LA Current, a professional sports team that will compete against teams based in San Francisco, New York, Washington, D.C., London, Paris, Rome and Budapest. Unlike the Olympics, the ISL scores on a team basis, and Krayzelburg said his team is built with that objective in mind.

“We’re really excited about our roster, and the depth and flexibility of our athletes … They can swim depending on what our needs are, based on our competition,” he said.

In a statement, Murphy said he was excited to be part of the effort to help find new swimming fans.

“Athletes have been clamoring to elevate the profile of swimming and ISL has given us the platform to do so,” he said. “International Swim League is allowing us to make a career out of swimming, and I am especially excited about joining Lenny’s team and excited about this incredible roster we have built.”

The ISL is a “revolutionary concept” for the sport, Krayzelburg said, and those who are working to make the league’s first season a success have to be “proactive, passionate and committed for it to be successful” when it begins this October. For instance, the Current will have to find a way to draw in fans and supporters despite no ISL competition being held in Los Angeles this year.

“Obviously, Los Angeles in general is one of the more captivating and well-known cities in the world with a very rich sports tradition,” Krayzelburg said. “This is something that we’re going to be focusing on to build our brand at a grassroots level in L.A., trying to come up with different ideas and concepts that interest the sports fans in Los Angeles so we can showcase some of the personalities of the athletes on our team.”

Swimming is most prominently featured during the Summer Olympic Games, and the Current’s swimmers can use the high-level competition to stay sharp in the four-year gap between Olympics, Baker said.

“We are able to train as hard as we can using these swim meets as quality practice leading up to the games and in-between medal competition years,” Baker said.

The 2028 Olympic Games also can benefit the sport of swimming and the ISL, Krayzelburg said, and many L.A. athletes, entertainers and business people looking for a way to take part. By starting now, a few years before the games, the Current can make the most of the increased attention coming the sport’s way in the next few years.

“By the time the games roll around, I think we can have an incredible presence in L.A. as a very successful sports franchise … I think it would be a great springboard into L.A. 2028,” he said.

CicLAvia rolls and walks its way through WeHo, Hollywood