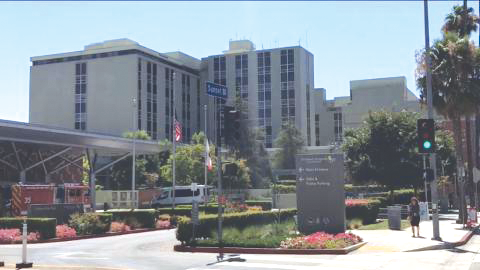 A fire smoldering in the basement of a CHLA building prompted evacuations. (photo courtesy of the LAFD)

Los Angeles Fire Department firefighters responded to a smoldering underground fire on Aug. 5 in the basement of a building in the Children’s Hospital Los Angeles complex on Sunset Boulevard.

Smoke from the blaze filled three lower floors of the building, prompting employee evacuations. The fire was extinguished in a little under one hour, and firefighters stayed throughout the afternoon to ensure the smoke dissipated.

The LAFD received the call at 11:19 a.m. They determined that construction involving welding in the basement of the building sparked insulation in a wall and caused it to smolder. The fire was concealed behind tiles on the outside of a wall.

LAFD spokesman Nicholas Prange said high rises can act like an oven when a fire occurs, and the flames being below-ground exacerbates the effect. Heat and smoke travel upward, and firefighters had to pass through layers of heat and smoke to get to the fire two levels below street level. Once they reached the subterranean level where the fire was located, they worked in an area where smoke continued to circulate. Although there was poor visibility, the heat source was located, firefighters breached the tile wall and extinguished the smoldering flames.

Approximately 200 hospital employees were safely evacuated from the ground floor and both floors below ground during the incident. After the fire was extinguished, crews spread out in the building to ensure all hazards were mitigated. Special thermal imaging cameras were used to make sure there were no additional heat sources.

Life support systems in the hospital remained functional throughout the incident and no patients were evacuated. Patients sheltered in place with staff and the building was compartmentalized to isolate them away from the smoke.

Series to be broadcast from Hollywood Bowl