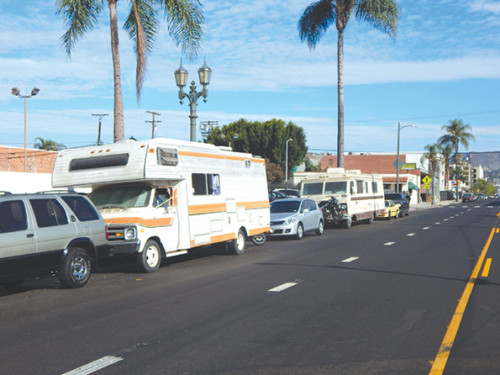 Under rules reinstated by the Los Angeles City Council on July 30, people who wish to park their vehicles and sleep in them overnight cannot do so on residential streets between 9 p.m. and 6 a.m. (photo by Edwin Folven)

After a contentious July 30 Los Angeles City Council meeting, people are once again prohibited from sleeping in their cars on residential streets between 9 p.m. and 6 a.m., or at any time within a block of schools, pre-schools, daycare facilities and parks.

Councilmen Bob Blumenfield, 3rd District, and Mike Bonin, 11th District, were absent, but the other 13 council members voted unanimously to renew Section 85.02 of the city’s municipal code, which had expired on July 1. With the rules back in place, people found using their cars, trailers, house cars and trailer coaches as residences in the restricted areas will be fined $25 for a first offense, $50 for a second infraction and $75 each time thereafter. The ordinance will next expire on Jan. 1, 2020, unless it is extended again.

More than 40 minutes of public comment overwhelmingly opposed the reinstatement of the rules, but the council voted without discussing the issue. The crowd loudly expressed its displeasure after the votes were cast.

Shayla Myers, an attorney with the Legal Aid Foundation of Los Angeles who spoke at the meeting against the prohibition, said for those living in a car or camper, life is hard enough without the new restrictions. Los Angeles lacks enough infrastructure – like water fountains, trash cans and bathrooms – to serve its homeless population, and the new rules prevent people experiencing homelessness from sleeping near places like parks, which often offer those necessities.

“By passing the ordinance that day, [the council] made it very clear that they were willing, even in light of the emergency the city is facing, to criminalize homelessness,” she said.

Councilman Mitch O’Farrell, 13th District, said the fact that people are forced to live in their vehicles is a “very, very unfortunate side” of the city’s homelessness crisis.

“It’s a real issue, and we shouldn’t paper over that,” he said.

However, the ordinance has been mischaracterized as a ban, O’Farrell said, and there are still streets where people who sleep in their cars can park overnight.

Many commercial and industrial areas still allow overnight parking, and Safe Parking LA, a nonprofit group, aims to connect those experiencing homelessness with designated parking locations that come with restroom facilities and security guards. The nonprofit’s website, safeparkingla.org, also provides maps showing which streets allow people to live in their cars, which streets are closed between 9 p.m. and 6 a.m., and the streets that don’t allow vehicle dwelling at all.

Mark Pampanin, spokesman for Councilman David Ryu, 4th District, also said in an email that the ordinance is not a ban. The homelessness issue provides “many tough choices to balance,” Pampanin said, and Section 85.02 seeks to “balance the safety of residential communities and address this crisis of our time.”

“To be clear, 85.02 does not ban people from sleeping in their cars, but outlines where vehicle dwelling is and is not permitted in the city of Los Angeles,” Pampanin said. “It is not a perfect law, and not one Councilmember Ryu wants to see extended into perpetuity. This is why Councilmember Ryu strongly supports more safe parking sites across Los Angeles.”

Myers said while the ordinance is not a total ban, the way it interacts with existing parking restrictions makes it a “de facto ban on those living in their vehicles in the city of Los Angeles.”

Myers said Safe Parking LA does not provide near enough spaces for the number of lived-in vehicles. Emily Uyeda Kantrim, associate director of Safe Parking LA, said the organization currently provides between 160 and 180 safe parking spaces, all of which are in the city of Los Angeles. By the end of the year, Safe Parkin LA plans to expand to approximately 450 spots in the city and county, Uyeta Kantrim said. This year’s homeless count showed nearly 10,000 vehicles used for dwelling in greater Los Angeles.

“Safe parking is not the answer when there is such a disproportionate number of people living in their vehicles,” Myers said.

The councilmen said they’d like to see long-term fixes to L.A.’s homelessness problem.

Pampanin said five homeless housing projects are currently underway in Ryu’s district, and the councilman is working on reducing the cost of housing and increasing protections for renters, such as with a reform of the Ellis Act that allows landlords to evict tenants if they’re leaving the rental business.

“We’re working in a lot of directions on how to deal with these issues. What we should be doing is working across all parties to put people into housing. I would argue that a car is not an adequate home,” O’Farrell said.