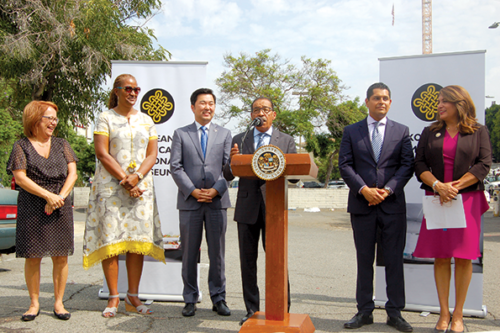 Elected officials presented a $4-million check at a dedication for the Korean American National Museum in Los Angeles. (photo by Ryan Mancini)

The leadership of the proposed Korean American National Museum received a $4 million check from local elected officials on Wednesday at 605 S. Vermont Ave., where the museum will be built.

Korean American National Museum board chair Jae Min Chang said the museum would be a landmark of Koreatown. Architect Eui-Sung Yie added that the museum would showcase and honor the past while bringing a piece of nature into the city with a “landscaped oasis.”

Each of the speakers noted the museum would be the first of its kind outside of South Korea, as a national museum located in another country. Plans for a museum began in 1991. The Los Angeles City Council granted the museum a long-term lease in Koreatown in 2012. It will operate as an institution devoted to preserving, studying and presenting Korean American cultural heritage in the United States. 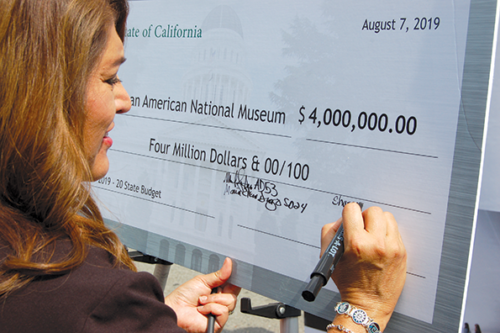 Assemblywoman Sharon Quirk-Silva (D-Fullerton) signs a state-sponsored check that will add to the $15 million used in building the Korean American National Museum in Los Angeles. (photo by Ryan Mancini)

Before she signed the check, Quirk-Silva said the museum would respect the Korean community’s history and traditions while also acknowledging the diversity within the area.

Chang is also CEO of The Korea Times and collaborated with the L.A.-based Morphosis Architects on the building’s design. The museum will not be operated by the Korean government’s Ministry of Culture, Sports and Tourism, as is the Korean Cultural Center, Los Angeles. The building’s design will reflect Korean architecture, with a courtyard and a Korean Hanok included, and plants native to Korea like bamboo, maple and pine. The new museum will feature several historical and modern artifacts, artwork and photos.

Santiago said what also makes the new museum different is its location within Koreatown. KCCLA is located on Wilshire Boulevard in the Miracle Mile.

“This is the central point to what I understand is the largest Korean American presence outside of Seoul, [South] Korea, so it should come here,” Santiago said. “Remember, it’s got a long history. It’s gone [through] the L.A. Riots, it’s gone through a vigorous process of establishing itself, it’s got strong contributions in the area. And we couldn’t be prouder of our Korean-American community.”

Cedars prepares families at annual back to school festival