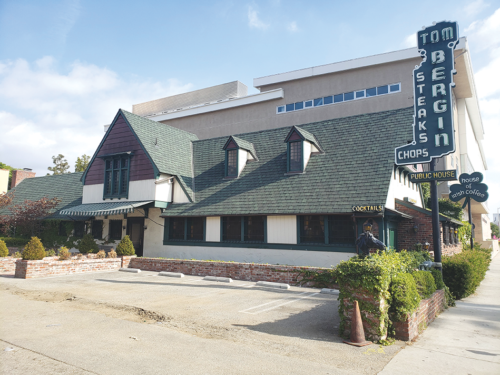 Before the Irish pub Tom Bergin’s closed after St. Patrick’s Day last year, it was a celebrity watering hole for the likes of Ronald Reagan and Kiefer Sutherland. (photo by Cameron Kiszla)

Derek Schreck, who purchased the Irish bar six years ago, said he sold the business at the end of June to a group called 840 Fairfax LLC. Bergin’s is located at 840 S. Fairfax Ave.

Schreck said he did not know who was behind the group, as he primarily dealt with attorneys to facilitate the sale, but his understanding is that the new owners will be able to “finance properties that may not be immediately successful” in order to reopen the business. Schreck would not divulge the sale price.

“I lost a considerable amount of money on the property,” he said.

As of Aug. 13, the Los Angeles County Assessor’s Office still lists Vintage Vices LLC, which is linked to Schreck, as the property’s owner.

Schreck said the reason Bergin’s closed last year, and his reason for selling the business, was entirely financial, and he wishes the new owners success.

“Even though ultimately it ended up not being a very good investment for me, it’s nice to see that it will come back for another go and hopefully the people who were very vocal about its preservation actually show up this time,” Schreck said.

At a June meeting of the Los Angeles City Council’s Planning and Land Use Management Committee, dozens of people spoke in favor of preserving Bergin’s as a historic-cultural monument, and a few said they were working to put together a group to reopen the business. In that committee meeting, the parking lot was exempted from the restaurant’s landmark designation so housing might be built on the lot while preserving the 70-year-old building. On June 17, the full council voted 14-0 to support that decision, with Councilman Jose Huizar, 14th District, absent.

Ken Hixon, senior vice president of the Miracle Mile Residential Association, which supported the landmark designation for Bergin’s, said his group has always wanted the pub restored to its former glory.

“We’d be very excited to see Bergin’s reopen,” he said.

Schreck, who lives nearby, said he’s staying on as a consultant to help get the business reopened “as soon as possible.”

“It’s a nice thing for the neighborhood to have the place back, and I really do encourage people to actually patronize it,” he said.