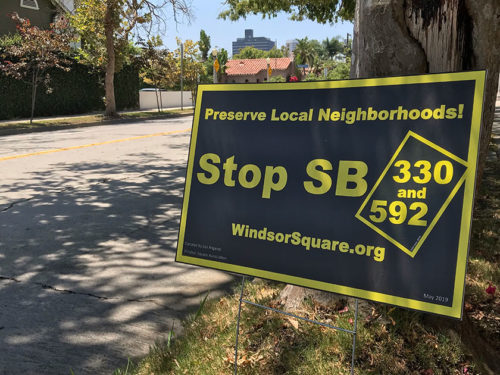 Lawn signs opposing SB 330 and SB 592 dot several streets near Windsor Square, including this one located on Sixth Street. (photo by Ryan Mancini)

As news of two proposed bills from the California State Senate makes its way across the state, homeowners are hoping to educate their neighbors and make their feelings known.

“We are concerned about the unintended consequences of Sacramento’s rushed legislation and the very spare input local groups and neighborhoods have had in drafting and re-drafting of the proposed bills,” Windsor Square Association board member, Caroline Moser, said.

Stickers cover up where the signs once read “Stop SB 50,” replacing the number with those of the other two proposed bills. SB 50, which was tabled this year, was another piece of housing legislation proposed by state Sen. Scott Wiener (D-San Francisco) that would permit higher density zoning near areas centered around public transportation. A press release issued from Wiener’s office on July 25 listed endorsements of the bill from Lt. Gov. Eleni Kounalakis, Controller Betty Yee, Treasurer Fiona Ma and Insurance Commissioner Ricardo Lara, signaling Wiener plans to revive the legislation.

SB 330, authored by state Sen. Nancy Skinner (D-Berkeley), would prevent local agencies from preventing a housing development project for lower income households or emergency shelters unless it was found to be inconsistent with that region’s zoning ordinances.

Authored by Wiener, SB 592 keeps portions of SB 50 legislation and similarly stops local agencies from disapproving of a housing project intended to comply with zoning standards. The bill originally focused on licensed cosmetologists and barbers changing their addresses, but was later “gutted and amended” into a housing bill.

“To do these sweeping zoning changes, they have to take into account the needs of how to address affordable housing,” said Cindy Chvatal, president of the Hancock Park Homeowners Association.

“These bills permit the demolition of homes in historic neighborhoods to make room for four- and five-story apartment buildings to be built lot line to lot line, right next door to single family homes,” reads one portion of the post.

Wiener said in a statement that he was aware of opposition coming from parts of Los Angeles, but pointed to support from Los Angeles residents in favor of aggressive pro-housing policies. He said the bills are “incremental steps in a pro-housing direction.”

“SB 592 and SB 330 are two approaches to alleviating California’s deep housing shortage,” Wiener said. “Our state has a shortage of 3.5 million homes, which is equal to the housing shortage of the other 49 states combined. California ranks 49 out of 50 states in homes per capita. Over the past 60 years, California’s population has almost tripled, while our annual housing production has gone down by 75%. These numbers are stark, and they point to a deep crisis.”

Among the senate bills’ critics is Los Angeles City Councilman David Ryu, 4th District, in which Windsor Square is located. Ryu is a critic of all three bills. He believes the bills will “remove community [voices] from planning their neighborhoods,” according to his­ spokesman Mark Pampanin.

“Sacramento would have much more success in setting ambitious goals and then helping cities like Los Angeles meet them, rather than attempting to set a single housing policy for a state as large and diverse as California,” Pampanin said.

“He’s given several town hall talks in opposition to SB 50 and has included [SB] 330 and [SB] 592 in his talks,” said Koretz spokeswoman Alison Simard.

Chvatal said there’s not one size to fit all of California.

“In L.A., I think they’re trying to address that,” Chvatal said. “We have a building boom going on, but we need to protect renters and create low income affordable housing, not build luxury housing.”