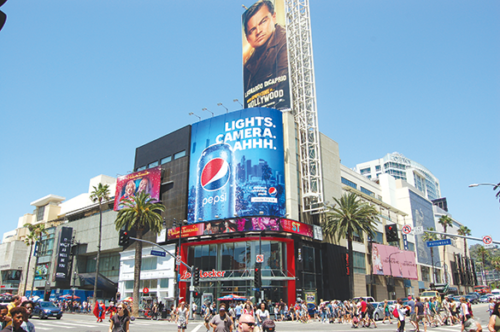 Plans for renovations are in works for the Hollywood & Highland center, which was recently purchased by new owners. (photo by Ryan Mancini)

“Following approval of the development of Hollywood & Highland, CIM was among the first private investors to identify the potential in Hollywood, acquiring an office building across the street from the site in 1998,” said Shaul Kuba, co-founder and principal of CIM Group. “Since then, we have actively developed, repositioned and operated numerous properties of all types throughout Hollywood, and we continue to work on our existing portfolio and new opportunities in this market.”

Hollywood & Highland, which opened in 2001, includes five levels of retail space above parking. A Metro Red Line subway station is located beneath the property.

DJM and Gaw Capital USA plan to “reimagine the 7.6-acre site over the next 24 to 30 months,” according to a press releases about the sale. No specifics were provided, but the plans call for upgrades to common areas and more entertainment aimed at bringing visitors to the property. Renovations will begin in 2020 and plans call for completion the following year.

“The retail landscape has shifted, consumer tastes have adapted, and ‘New Hollywood’ is constantly redefining itself,” Stenn Parton, chief retail officer at DJM, said in a statement. “With Hollywood & Highland, we at DJM and Gaw Capital are eager to seize the opportunity to create, in the heart of Los Angeles, an environment where the iconic allure of ‘Old Hollywood’ meets the modern innovation of new media.”

“Our opportunity as the new stewards is to make Hollywood & Highland a 21st-century destination, one that offers visitors a piece of Hollywood that is grounded by the needs of the modern consumer,” Parton added. “A fresh design and rebrand bolstered by relevant global brands, top-of-the-line food and beverage experiences, and a state-of-the-art digital concept is merely the beginning of our plans.”

Hollywood leaders responded with optimism about the sale. Kristopher Larson, president and CEO of the Hollywood Property Owners Alliance, said he is looking forward to learning more about the new owners’ vision for the property. Los Angeles City Councilman Mitch O’Farrell, 13th District, added that he is also excited to see what the future holds for Hollywood & Highland.

“Hollywood & Highland is a destination known the world over and a key anchor in the historic core of Hollywood,” O’Farrell said. “I look forward to hearing details from the new ownership team on what they have in mind. Key to my HEART of Hollywood initiative is elevating the residential and visitor experience with the built environment and adding vibrancy to our public spaces. In that sense, there is ample opportunity for a creative, new vision for this important site.”