Highland Avenue median gets a little greener through partnership 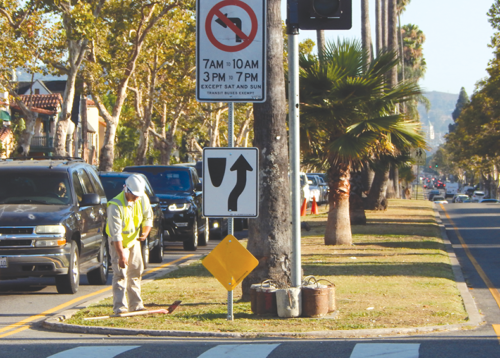 photo by Edwin Folven
Sprinklers were repaired on the Highland Avenue median near Third Street on Aug. 21. The repairs were part of a larger effort to better maintain and beautify the median.

The Highland Avenue median between Melrose Avenue and Wilshire Boulevard has been getting more attention recently from the Bureau of Street Services, thanks to the vigilance of homeowners in Hancock Park.

The work is being conducted in partnership with the Hancock Park Homeowners Association and the office of Councilman David Ryu, 4th District, which are working together with the Bureau of Street Services to improve neighborhood aesthetics. On Wednesday, workers replaced sprinklers on a portion of the median just north of Third Street where the grass had mostly turned brown in recent weeks. Members of the homeowners association recently walked the median and identified areas where improvements are needed, and the information was sent to the Bureau of Street Services. That effort followed a meeting between HPHA members; Adel Hagekhalil, director of the Bureau of Street services; and staff from Ryu’s Office, in which the issues affecting the median were discussed.

“They did some repairs, and we are getting a response,” said Cindy Chvatal, president of the HPHA. “We are hopeful and we going to stay vigilant. We want to make sure the irrigation gets repaired and the trash gets cleaned up.”

The homeowners association asked for a meeting with city officials after areas of the median became noticeably brown this summer, and people reported seeing trash in some locations. The median, and the queen palms and Mexican fan palms that line the thoroughfare, were designated a historic-cultural monument by the city of Los Angeles in 1972.

The HPHA believes the median deserves special attention. The Bureau of Street services agreed and formulated a plan for better upkeep and maintenance.

“We met with the community and reviewed the issues,” said Heather Johnson, a spokeswoman for the Department of Public Works, which oversees multiple departments including the Bureau of Street Services. “The median is maintained every two weeks. We agreed to work with the community to assess the median and identify any brown areas that need further care. StreetsLA (Bureau of Street Services) will assess the locations and identify what is needed to address the conditions. The landscaping/irrigation system will be assessed to quantify any repairs needed. We will also discuss with the contractor performing the maintenance to ensure that the cleaning is properly done. Our staff will inspect the quality of the work.”

In addition to the work on Aug. 21, repairs to irrigation system valves in other locations were completed on Aug. 2. Chvatal said the HPHA is also planning to plant 14 news trees on the median to “fill in gaps.”

“I think it’s nice for people who are driving along to see something that is taken care of and green,” she added.

Ryu said the median is an important component of the local area’s infrastructure.

“I have been working with the community on maintenance and care for the Highland Avenue medians for years, as well as upgrading other community infrastructure in District Four,” Ryu said. “With Adel at the helm of the Bureau of Street Services, we have someone willing to think outside the box and work with us on creating new solutions. I’m glad to see the bureau work together with my office and the community to bring long-term solutions to this neighborhood