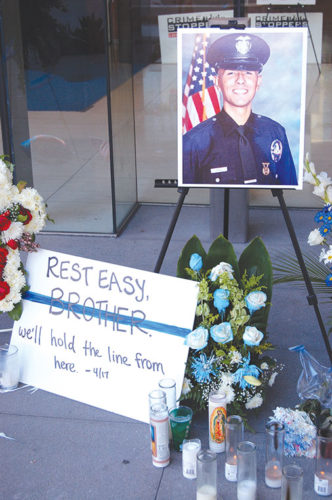 A memorial for Officer Juan Diaz was placed at LAPD headquarters. (photo by Edwin Folven)

Cristian Facundo, 20, of Murrieta, and Francisco Talamantes III, 23, of Temecula, were each charged with one count of murder and two counts of attempted murder, with the special circumstance allegation of murder while they are active participants in a criminal street gang.

Both men, along with Ashlynn Smith, 18, of Temecula, also face one count of shooting at an occupied motor vehicle and vandalism. Additionally, Smith faces one count of accessory after the fact, while Talamantes was charged with one count of possession of a firearm by a felon. The defendants were arrested over the last weekend at different locations. Investigators did not divulge how the suspects were identified and located.

On July 27, the defendants were involved in a confrontation with a group of people, including 24-year-old Diaz, near a taco stand in Lincoln Heights. Diaz allegedly told the defendants to stop scrawling graffiti nearby. Minutes later, Facundo allegedly opened fire, killing Diaz and wounding another man.

All three defendants are also accused of vandalizing a vehicle less than an hour before Diaz’s murder. After the murder, Facundo and Talamantes allegedly were driven back to the vandalism scene by Smith and are accused of an attempted murder there, said prosecuting Deputy District Attorney Michael Blake, of the Crimes Against Peace Officers Section.

If convicted as charged, the defendants face a possible maximum sentence of life in state prison without the possibility of parole, or the death penalty. A decision on whether to seek the death penalty will be made at a later date.

Pedestrian killed in collision on Melrose