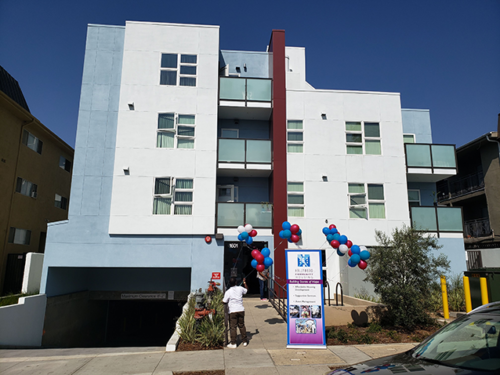 The Coronel Apartments in East Hollywood contain 54 affordable housing units that range from one to three bedrooms. (photo by Cameron Kiszla)

At a grand opening ceremony on Aug. 22, the officials and real estate professionals involved in the project said they were pleased to see the complex come to fruition after more than 10 years of work.

Los Angeles City Councilman Mitch O’Farrell, 13th District, praised the project for its sustainability measures, including drought-tolerant landscaping, geothermal solar heating and energy-efficient lights and appliances. He also pointed out that the apartment complex’s two four-story buildings are joined by an existing home that was built in the 1920s, which was renovated and is now a duplex.

“We do not need to sacrifice our history to grow into the future,” O’Farrell said.

Officials also used the moment to urge their supporters to call for more affordable housing, which O’Farrell said “has been and continues to be a top priority for me as council member.”

This year, the city, county and state all saw increases in the annual homeless count. O’Farrell said high rent prices can make it unaffordable for people to maintain a place to live, contributing to the homelessness crisis.

“We must continue the push to build more affordable housing throughout the city, the county and the state,” he said.

O’Farrell also thanked the media members present for covering a positive story related to homelessness and affordable housing, as he said the city is making progress in overcoming Los Angeles’ lack of affordable housing. Charmaine Atherton, senior vice president with Bank of America, which helped finance the project, echoed O’Farrell in encouraging those in attendance to publicly support affordable housing.

“We can’t depend on the newspapers … to tell [the public] the positive side of the story, always. So I’m going to ask this: The next time you’re at a barbecue, a dinner party, a picnic and you’re talking amongst your friends, take a stand for affordable housing,” she said.

Rushmore Cervantes, general manager of the Los Angeles Housing and Community Investment Department, thanked O’Farrell for his work on behalf of affordable housing and encouraged the attendees to join the battle against NIMBYs – those who would say “not in my back yard” – which must be fought “day-in and day-out” to continue the forward progress for a worthy cause.

“Everyone deserves to have a home,” Cervantes said. “These aren’t units; these are homes, and they make a difference.”

Ryu proposes multifaceted approach to fight against homelessness in L.A.