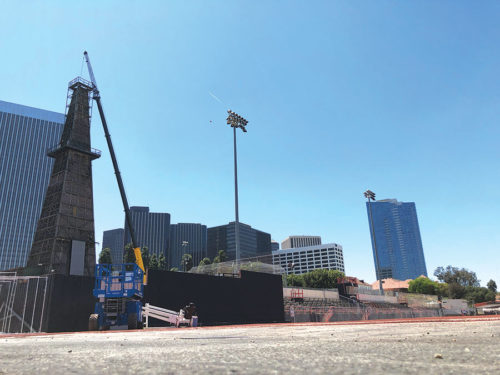 District counsel said the project was always likely to cost upward of $20 million, despite the $8 million figure that was floated two years ago. (photo by Luke Harold)

A fire erupted on Aug. 13 in equipment at an oil well that is being plugged at Beverly Hills High School, and was contained and extinguished in approximately 25 minutes.

The Beverly Hills Fire Department received a call at 5 p.m. and arrived at the campus minutes later. The fire occurred in equipment at an oil well near the school’s softball field.

No injuries were reported. Students had left the campus for the day and the fire did not pose a threat to them, said BHFD Deputy Fire Chief Joseph Matsch. The Beverly Hills Unified School District sent a message at 6:20 p.m. letting people know what happened and that the fire was extinguished and no students were in jeopardy.

Heavy smoke was billowing from the equipment when firefighters arrived, Matsch said. They determined that the fire occurred in a flare unit that burns off excess methane gas that builds up in the well. Although the well has been decommissioned and is being permanently plugged by an independent contractor, ARB Inc., related-equipment is still functioning to burn off excess gas in the well.

Matsch said the fire occurred when crews were working on the well and liquid rose to the surface and entered the flare unit. The fire and thick smoke occurred when the unit, which Matsch said was functioning properly, attempted to burn the liquid.

Firefighters protected nearby structures and used a foam to extinguish the flames. The blaze was extinguished at 5:25 p.m. Crews decommissioning the well will take steps to prevent the situation from reoccurring, Matsch said.

Firefighters remained at the scene to ensure the fire did not start again, and personnel will follow up with ARB and the city to ensure fire prevention measures are in place, he added.