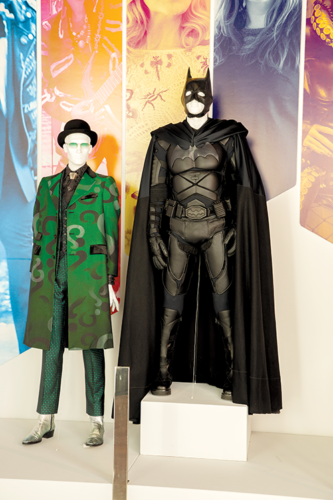 Batman and the Riddler’s costumes from the television series “Gotham” appear at the Art of Television Costume Design Exhibition at the Fashion Institute of Design & Merchandising Museum. (photo courtesy of FIDM Museum and Galleries)

The Fashion Institute of Design & Merchandising Museum and the Television Academy announced the 13th annual presentation of the Art of Television Costume Design.

Some of the shows to be recognized in the exhibition include “The Marvelous Mrs. Maisel,” “Game of Thrones,” “Good Omens,” “Gotham,” “Native Son,” “Outlander,” “The Umbrella Academy” and “Veep.”

The exhibition offers visitors an opportunity to review their favorite TV shows and characters. The exhibition celebrates television costume design from a variety of genres, including episodic series, limited series and variety programming. Acknowledging the 2018-19 television season, the exhibition showcases the wide range of costumes from period pieces, contemporary dramas and sci-fi fantasies to comedies.

The exhibition is free to the public and will be held in the FIDM Museum at the Fashion Institute of Design & Merchandising in downtown Los Angeles through Saturday, Oct. 26. Museum hours are 10 a.m. to 5 p.m., Tuesday through Saturday.