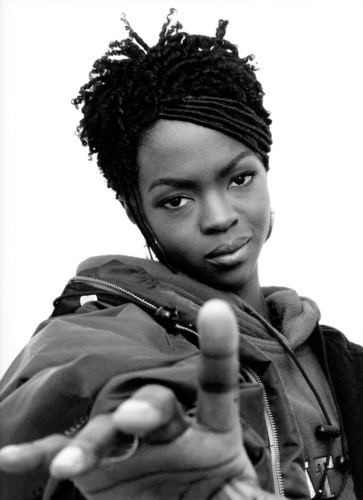 Lauryn Hill is one of several hip-hop artists featured among the 120 photos on display in “Contact High: A Visual History of Hip-Hop” at the Annenberg Space for Photography. (photo by Jayson Keeling, courtesy of Sara Gurkin of Sunshine Sachs)

The Annenberg Space for Photography’s current exhibit “Contact High: A Visual History of Hip-Hop” is extending its run for an additional week due to popular demand.

The exhibition will stay open through Sunday, Aug. 25, and is free and open to the public.

“Contact High” is among the most popular photo galleries in the space’s 10-year history, and offers guests photos of hip-hop icons an interactive record shop and a documentary on the history of this popular music genre.

Celebrating the photographers who have played a role in bringing hip-hop’s visual culture to the global stage, “Contact High” is an inside look at the work of hip-hop photographers, as told through their unedited contact sheets.

Based on the bestselling-book of the same name and with creative direction by Fab 5 Freddy, the exhibition includes nearly 140 works from 60 photographers. Guests will also see over 75 original and unedited contact sheets, from Barron Claiborne’s Notorious B.I.G. portraits and early images of Jay-Z, Kendrick Lamar and Kanye West at the start of their careers, to Janette Beckman’s photos of Salt-N-Pepa, and Jamel Shabazz and Gordon Parks documenting hip-hop culture.

Rare videos, memorabilia and music are included to complement the photographs, demonstrating how the documentation of a cultural phenomenon impacts politics, culture and social movements around the world. In a first for the photo space, visitors can enjoy Contact High Records, a pop-up record shop featuring rare vinyl spanning the history of hip-hop.