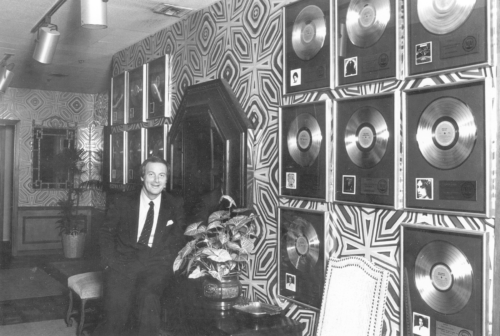 One of the key players behind the most memorable concert tours of the 1970s, Weintraub and Concerts West recognized the potential for great artists to play for larger audiences and to create one-of-a-kind events. During his career, Weintraub worked with artists such as Frank Sinatra, Elvis Presley, John Denver, the Carpenters, Neil Diamond, Bob Dylan, Rick James, Beach Boys, Led Zeppelin, Bad Company, the Commodores, the Bee Gees, the Moody Blues, The Eagles, Eric Clapton, Stevie Wonder and Paul McCartney.

The new exhibit will showcase original items from some of Weintraub’s most notable tours, including personalized jackets, tour documents, contracts and more. On Aug. 15, at 7 p.m., Weintraub’s son Michael will participate in a panel discussion with Bob Finkelstein, former president of Management 3 and Concerts West, and co-chairman of Frank Sinatra Enterprises; John Meglen, co-CEO Concerts West; Claire Rothman, general manager and vice president of the Forum; Sims Hinds, tour promoter for John Denver, Neil Diamond, The Eagles and The Beach Boys; and Peter Jackson, tour management for The Moody Blues and Eric Clapton. The panelists will discuss the stories behind the exhibit. Music industry analyst and critic, Bob Lefsetz, will moderate the discussion in the Grammy Museum’s Clive Davis Theater.

“Jerry was one of the greats, and he had clout,” said Diamond, who has previously had a Grammy Museum exhibit based on his career. “After I had taken a hiatus from the music business for four years in the early 1970s, he used that clout as a manager and concert promoter to bring me back into the homes and hearts of my audience via concerts and TV specials. He was great at what he did, and he gave me the courage to take on new challenges. It’s fitting that the Grammy Museum is recognizing him in this way.”

The Grammy Museum is located at 800 W. Olympic Blvd. For information, visit grammymuseum.org.

Cause of WeHo overdoses released