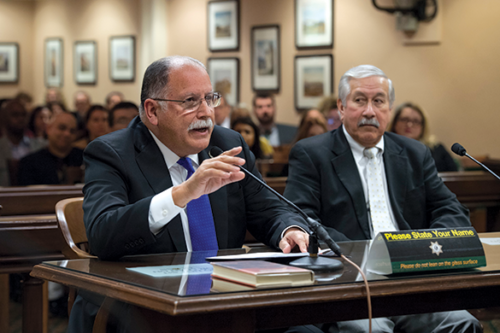 Assemblyman Jose Medina (left) said the importance behind making AB 331 a two-year bill was to take “time to ensure we get the curriculum right.” (photo courtesy of the Assembly Democratic Caucus)

After receiving criticism over a proposed ethnic studies model curriculum – including opposition from the city of Beverly Hills and the Los Angeles Museum of the Holocaust – California Assemblyman Jose Medina (D-Riverside) tabled an ethnic studies bill he authored until 2020.

Medina, whose Assembly Bill 331 would mandate that ethnic studies be a graduation requirement for high schools, said in a statement on Aug. 22 that AB 331 would become a two-year bill, which pushes any potential passage of the legislation to 2020. AB 331 was approved in the Senate Education Committee on June 27.

“It is not a question of whether the subject itself is necessary, but rather, how do we ensure the curriculum is comprehensive, rigorous and inclusive enough?” he said.

Going forward, Medina said he will “work closely with the California Department of Education and the Instructional Quality Commission” to shape the bill to reflect “California’s standards and values.”

The California Department of Education’s Instructional Quality Commission received approximately 20,000 responses about the ethnic studies model curriculum during the public comment phase, according to CDE spokesman Scott Roark. The majority of those responses were in favor of including a form of Jewish studies in the curriculum, Roark said.

“We’ve compiled all the comments, and we’re going to recommend changes based on those comments,” he said.

The Instructional Quality Commission will submit an edited draft curriculum by the Sept. 20 deadline. The deadline for the California Board of Education to take action on the updated draft curriculum is March 31, though Roark said there’s a possibility the timeline could be extended.

The Los Angeles Museum of the Holocaust released a statement on Aug. 16 thanking those who spoke “out about the flaws in the proposed legislation.” On Aug. 20, the Beverly Hills City Council passed a resolution condemning the draft curriculum. They claimed it was anti-Semitic and ignored Jewish American history.

The City Council also agreed to organize an in-person meeting with Sacramento legislators to discuss the draft curriculum. Bosse confirmed that while no plans have been made for a joint trip, she said she will go to Sacramento in case there are new problems with the updated draft curriculum.

Further developments about the draft curriculum will be announced within a couple weeks, Roark said. He added, “We need to get this right.”