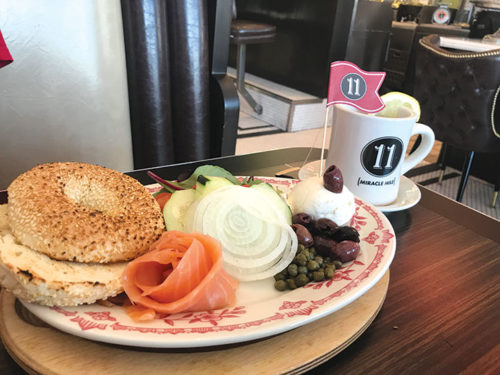 Order the lox platter with fresh bagels from the Bagel Broker or the Lox Box to take home and enjoy. (photo by Jill Weinlein)

Restaurateur Bradley Rubin opened Eleven City earlier this year, an old school diner and delicatessen serving traditional fare, as well as healthier options to appeal to all ages and palates.

Raised in Chicago on deli and diner comfort food, Rubin is enthusiastic about bringing the dishes he loves to Los Angeles. Located in anArt Deco building along the Miracle Mile, Rubin’s light and lively space offers an open kitchen, deli counter, salad bar, soda fountain, candy counter and plethora of comfortable booths. The interior design features recycled treasures from all over the United States. Old meat hooks from a butcher plant in Ohio are enhanced in gold paint and hang above the deli counter.

Rubin and his chefs prepare almost everything on-site. They roast their own meat, have a great relationship with a local bakery that provides fresh challah and rye bread, and get a daily delivery of bagels from L.A.’s own Bagel Broker.

When Rubin handed us the extensive menu after a tour of the facilities, we noticed that breakfast was served all day and ordered the signature challah bread French toasts with cups of Intelligentsia coffee. The thick-cut challah was topped with sliced strawberries, bananas and a sprinkling of toasted coconut. The “Black and White” French toast dazzled with white chocolate sauce, milk chocolate drizzle and a sprinkling of pretzel-dust.

Next, we ordered a three-egg white omelet that was whipped with a handful of spinach. It was the thickest and fluffiest omelet I’ve ever seen and tasted.

Guests can add cheese, a variety of vegetables, bacon, pork or chicken sausageor ham to customize their omelet.

Rubin told us that the kitchen roasts turkey on the bone and cuts it for sandwiches. They also grind it to make turkey burgers with a pinch of sage and rosemary. Nothing is wasted here; the turkey bones are even used to enhanceBubbie’s Chicken Soup. The bowl of soup arrives with a huge matzo ball in the center, a recipe passed down from Rubin’s grandmother. He and his chefs make a soup base by adding diced carrots, celery and onions, along with fresh turkey bones and a little schmaltz.

“We don’t use a salty bouillon cube,” said Rubin.

He recommended we take a pinch of fresh challah bread and dip it into the clear broth to try the perfect “Jewish penicillin.” Other freshly made soups include sweet-and-sour cabbage, and tomato basil.

Delicatessen favorites like brisket are prepared at 6 a.m. and served later in the day with carrots and potatoes. Order the Old School Platter with freshly cut lox, capers, tomato, onions, cucumber, olives and sliced BagelBrokers bagels, or a pickle plate. The lox platter is so popular that Rubin now offers a Lox Box for locals to take home and enjoy.

For healthier fare, the menu includes three different avocado toasts. We ordered one that had thick mashed avocado on a wheat bagel with sliced cherry tomatoes, a sprinkling of feta, light seasoning and micro greens. We added a fried egg on top for extra protein. Another option is avocado on rye bread with pomegranate seeds and feta.

Other health-conscious options include a trip to the salad bar or ordering one of the menu’s specialty salads. The Amazing Kale is a mix of kale, orange wedges, green apples, black currants, grape tomatoes, candied pecans and white cheddar cubes, dressed with a light apple cider vinaigrette.

A healthier deli sandwich is the Veggie Reubenserved open or closed face with grilled red pepper,portobello mushroom, sauerkraut, spinach, Thousand Island dressing and Swiss cheese. There’s also Impossible and Beyond burgers that are vegan and gluten free (the Beyond burger doesn’t contain soy, either), best enjoyed with a plate of crispy, warm steak fries. 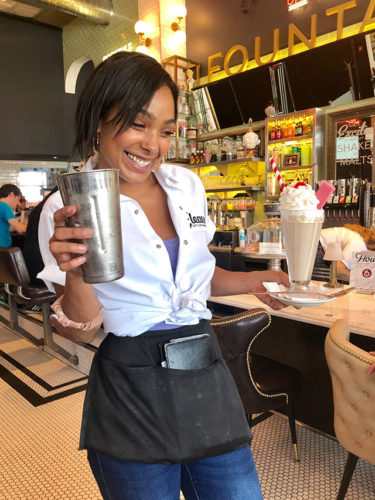 Rubin’s refurbished soda fountain holds a variety of whimsical vintage liquor bottles that he and his grandmother have collected, and features an in-house soda jerk who pours crafted, classic 100% cane sugar barrel root beer into icy, bottomless mugs. Other vintage phosphates include Lester’s chocolate or cherry with a plain seltzer sidecar, Brooklyn eggcreams, cherry or vanilla cola, and a Purple Haze Float made with grape soda and vanilla ice cream.

When I asked Rubin how this deli-diner got its name, he told me, “I opened a deli in Chicago on 11th Street, I was born on August 11, my favorite sport’s jersey number is 11, and the last two numbers of this restaurant’s phone number are 11. Eleven seems to always pop up in my life.”He also shared the history of a good deli: “Deli’s in the 40s-60s were a status symbol to bring your family to for a hearty meal. A sandwich stacked high with pastrami, turkey or corned beef meant a sign of good times.”

Here at Eleven City L.A., the portions are generous enough to feed an entire family.

Rubin is not reinventing diner and deli food, he is just modernizing it, as demonstrated by the restaurant’s newly acquired liquor license.

Come in during Happy Hour for the best value with draft beers, Frosé (frozen rosé), frozen vodka lemonade (a Rubin family recipe), well drinks, wine and mimosas for $6 each. Enjoy one of these with $6 food specials, including turkey, salami or beef sliders, mac and cheese, cheese fries and onion strings.

National Night Out celebrations to be held in local communities