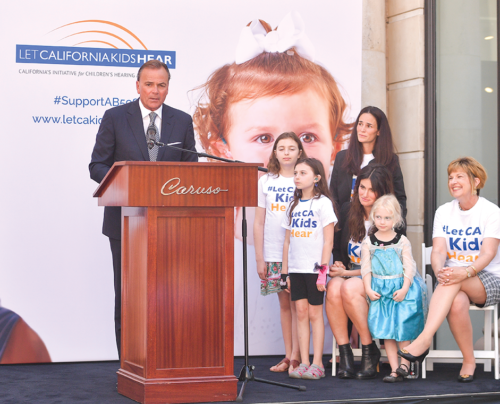 Developer Rick Caruso addresses the crowd at The Grove while fellow supporters of AB 598, such as singer and actress Idina Menzel, look on. (photo courtesy of Caruso)

For Rick Caruso, developer of The Grove, hearing loss hits close to home. His daughter, Gianna, was born with hearing loss, which was detected with a hearing test that was mandated by state law.

Debbie Schrader, the educational specialist at the USC Keck School of Medicine’s Department of Otolaryngology – which deals with ears, noses and throats and is named in honor of the Caruso family – said it’s vital for children to be able to hear as much as possible, especially early in their lives. Children need 20,000 hours of “linguistic input” to be ready to learn to read and write, she said.

The Carusos were able to purchase hearing aids for their young daughter, allowing her to learn to speak and hear in a normal timeframe, but not all children in California will have that opportunity, Caruso said. Some insurance companies won’t cover hearing aids for children, which can cost thousands of dollars and must be replaced every few years.

“We have seen firsthand the impact of a child with hearing loss. But more importantly, we have seen the positive impact that early intervention makes when a young child gets hearing aids,” Caruso said.

“It’s encouraging to see the growing support for AB 598,” Bloom said in an email. “Parents around the state have been supporting the bill for years because they understand firsthand the relief the bill would bring them. The growing support – from individuals, from advocates, from other legislators – will help get this bill across the finish line.”

Menzel, who is best known for the Broadway show “Wicked” and the film “Frozen,” said one of her family members suffers from hearing loss and the aids dramatically improved the child’s life. That’s why Menzel is advocating for the bill, which she described as a “no-brainer” everyone could get behind in a divided political climate. Menzel added that she also has some more “selfish” motivations for supporting AB 598.

“I want to be on a stage singing, and if there’s a child out there, eager to sing along, I want to take that child’s hand and share in the gift of song,” she said.

AB 598 passed the state Senate Health Committee in June, and it next heads to the state Senate Appropriations Committee for a hearing later this month. As the bill moves forward, Sussman – Bloom’s sister – said Let California Kids Hear will support its passage with a media campaign featuring hearing-impaired California children and their parents.

Caruso added that he believes the bill has “widespread support,” but he is still encouraging all Californians to contact their state legislators to advocate for the bill.

“I wouldn’t take anything for granted. Politics is politics, and I think everybody should be leaning in, calling their offices and making sure this happens,” Caruso said. “Don’t rest until it passes.”