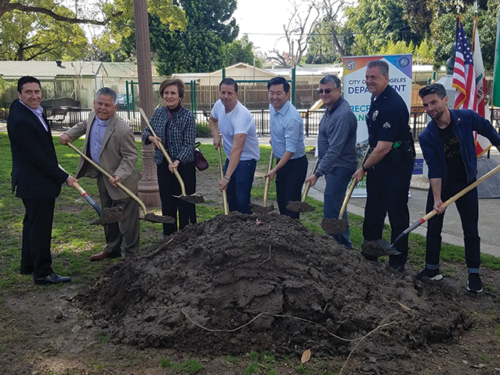 The Los Angeles City Council voted to fund the next phase of the ongoing De Longpre Park Improvements Project on Aug. 28.

This next phase of the project will require an estimated $250,000 in money leftover from the now-defunct Community Redevelopment Agency of Los Angeles. The city of Los Angles previously used Quimby Act fees – money paid for new land or park projects by developers in exchange for allowing them to build projects– for a 4,200-square-foot play area, which replaced sand in the playground with a rubberized surface to comply with the Americans with Disabilities Act, and installed a shade structure roof.

Built in 1924, De Longpre Park was named after artist Paul de Longpre. Six years later, a memorial to Valentino was installed on what would have been the actor’s 35th birthday. It has since undergone several restoration efforts.

For Councilman David Ryu, 4th District, who championed the De Longpre Park Improvement Project, the expansion of green space and improving parks has been a top priority, according to spokesman Mark Pampanin.

“It’s an important park, and we want to be sure it’s the best it can be for families, neighbors, children, pets – anybody who needs time in a green space,” Pampanin said.

Ryu said during a groundbreaking ceremony in March that parks should be “a place to feel at home in your own neighborhood,” a sentiment he wanted to share with the 8,000 residents within walking distance of De Longpre Park.

Forty parks are located throughout Ryu’s district, Pampanin said, so it’s an ongoing mission to incorporate any necessary construction or improvements to the parks. Ryu believes in “the power of parks” and growing up a child, he did not have access to a backyard while living in an apartment in East Hollywood, Pampanin said.

“De Longpre Park is a unique meeting point of community, green space and Hollywood history, and it deserves to be improved for the families and neighborhood it serves,” Ryu said.

The Department of Recreation and Parks will direct contractors to begin the next phase of the project no later than Sept. 30, though Pampanin said development will begin once the CRA/LA board overseeing funds gives its final authorization. A date for completion has also not yet been determined.