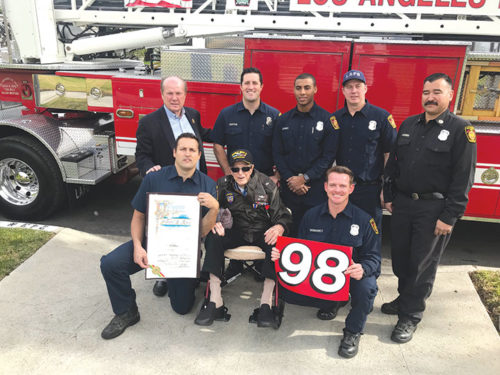 Many in the community are mourning Julian Alan “Bud” Rice, a Hancock Park resident and World War II pilot who died on Aug. 4, at the age of 98.

Rice, a beloved husband, father and grandfather, passed away in Los Angeles, surrounded by his family. Born in Panama on Jan. 8, 1921, Rice was raised in that country, where his family owned and operated the first American hotel and also Atlas Brewery, which still exists today. He attended Holy Cross in New Orleans, where he was an honors student, athlete and actor, and served as valedictorian.

After school, Rice worked on the Panama Canal until he left in April 1942 to enlist in the Army Air Force Cadet Training program during World War II. Piloting a C-47 for the 37th Troop Carrier, Rice went on to become one of more than 800 pilots who flew on D-Day, dropping 82nd Airborne paratroopers in Normandy for the largest invasion ever attempted. In total, Rice flew more than 700 daily transport and combat missions during World War II. His stories of D-Day were reported in many publications and television news programs.

Rice published a book in 2018 titled “Glitches,” which depicts unfortunate incidents that led to the loss of many comrades in his troop. Rice wanted those stories documented before he passed away, according to his family. Rice also attended 70th anniversary ceremonies for D-Day in Germany and France, where he was reunited with the plane he flew during World War II – Whiskey 7 – which his family had discovered fully-restored in a New York museum. Seventy years later, he was in the air behind the wheel in the same cockpit, reliving his love of flight.

Rice moved his family to California in 1954, where he worked as a sales engineer for Chicago Rawhide, Gits Bros. and Garrett Corporation until retirement at the age of 71. He was also a musician, artist, sports enthusiast, golfer, author and comedian.

Rice’s family members said he had a great sense of humor, but his strongest passion was for his wife, Bette, who passed away in 2018 after 71 years of marriage. Rice and his wife lived in Hancock Park for 65 years in the house that his mother owned before him. They are survived by their five children Mark Rice, Kathleen Rice Rosa and husband Greg, Linda Rice, Mary Beth Rice Krieger and husband Bram, and Bill Rice and wife Louise, along with 10 grandchildren and six great-grandchildren.

A memorial service was held on Aug. 20 at St. Brendan Church. In lieu of flowers, the family asked that donations be made to Hollywood American Legion Post 43 or a charity that supports veterans. Notes of condolences may be emailed to the family at mrice777@aol.com.