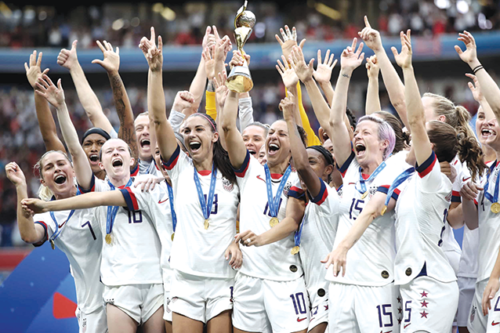 A pair of new proposals from the Los Angeles City Council aim to level the playing field when it comes to pay for men’s and women’s sports.

Council President Herb Wesson, 10th District, introduced a motion on July 31 to require competitions in Los Angeles that require a city permit to provide equal pay and prize money for the men’s and women’s divisions. President Pro Tempore Nury Martinez, 6th District, and Councilwoman Monica Rodriguez, 7th District, co-presented the motion, which was seconded by Councilman David Ryu, 4th District. The motion will next go before the Public Works and Gang Reduction Committee, then to the City Attorney’s office.

Wesson said the equal pay conversation has been happening for decades, but recently, he’s noticed “a lot of desire” to close the wage gap. Wesson said momentum has been helped by the U.S. women’s national soccer team, which won this year’s World Cup while pushing for pay equal to what the men’s national team receives. Fans of the U.S. women’s team chanted “equal pay” from the stands after the Americans captured the championship.

“I think the worst thing that we could do is not step on the gas pedal,” Wesson said.

Wesson added that he is “optimistic” that Los Angeles’ “very progressive” City Council can enact the proposal, which might then inspire other cities and states to the east to approve similar measures.

“I’ve said this in many interviews in the past where it relates to Los Angeles, I believe that the winds in this country blow from the west to the east, and the cities and states throughout this land are looking at us. I think we have the responsibility to lead,” Wesson said.

Wesson also seconded a separate motion from Ryu that has similar intentions. Ryu’s motion, co-introduced with Martinez on July 31, would put the city’s support behind U.S. Senate Bill 2062, which would prevent federal funds from being used for the 2026 World Cup, some of which will be held in Los Angeles, unless the U.S. Soccer Federation provides the same pay to the men’s and women’s national team.

Ryu said in a statement that seeing the U.S. women capture the World Cup, the team’s fourth, was a “moment of pride for our country,” but “it is a stain on U.S. Soccer that our women’s team – the best in the world – is paid less simply because of their gender.”

“Pay inequality persists in all aspects of society, from the boardroom to the factory floor to the highest levels of professional sports. It’s 2019, and we’re still talking about this issue – I think it’s due time we do something about it,” Ryu said. “The city of Los Angeles should stand up for equality and show that we are serious about taking on gender discrimination.”

The proposal next goes before the Rules, Elections and Intergovernmental Relations committee.

Cedars prepares families at annual back to school festival