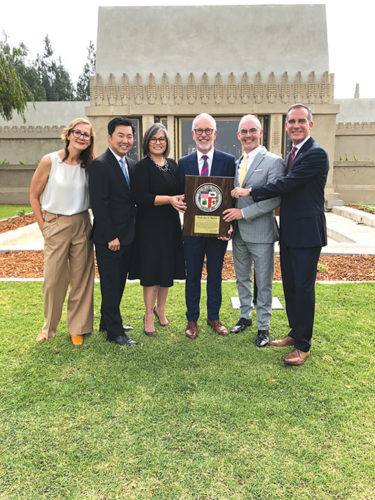 Hollyhock House is Los Angeles’ first addition to the UNESCO list. The building was designed by famed architect Frank Lloyd Wright and is located in Barnsdall Art Park, located at 4800 Hollywood Blvd. Hollyhock House was one of eight major works throughout the country spanning 50 years of Wright’s career that were combined in one designation celebrating the architect’s work on the UNESCO list.

“Hollyhock House is one of L.A.’s greatest cultural treasures,” Garcetti said. “This home will inspire Angelenos for generations to come, and its well-deserved place on UNESCO’s World Heritage List is a fitting tribute.”

A philanthropist and art collector, Barnsdall deeded the land, including 5,000-square-foot Hollyhock House, to the city of Los Angeles in 1927.

Hollyhock House is operated by the Los Angeles Department of Cultural Affairs and is open for self-guided tours from 11 a.m. to 4 p.m., Thursday through Sunday. Tickets are $7. For information, visit barnsdall.org.